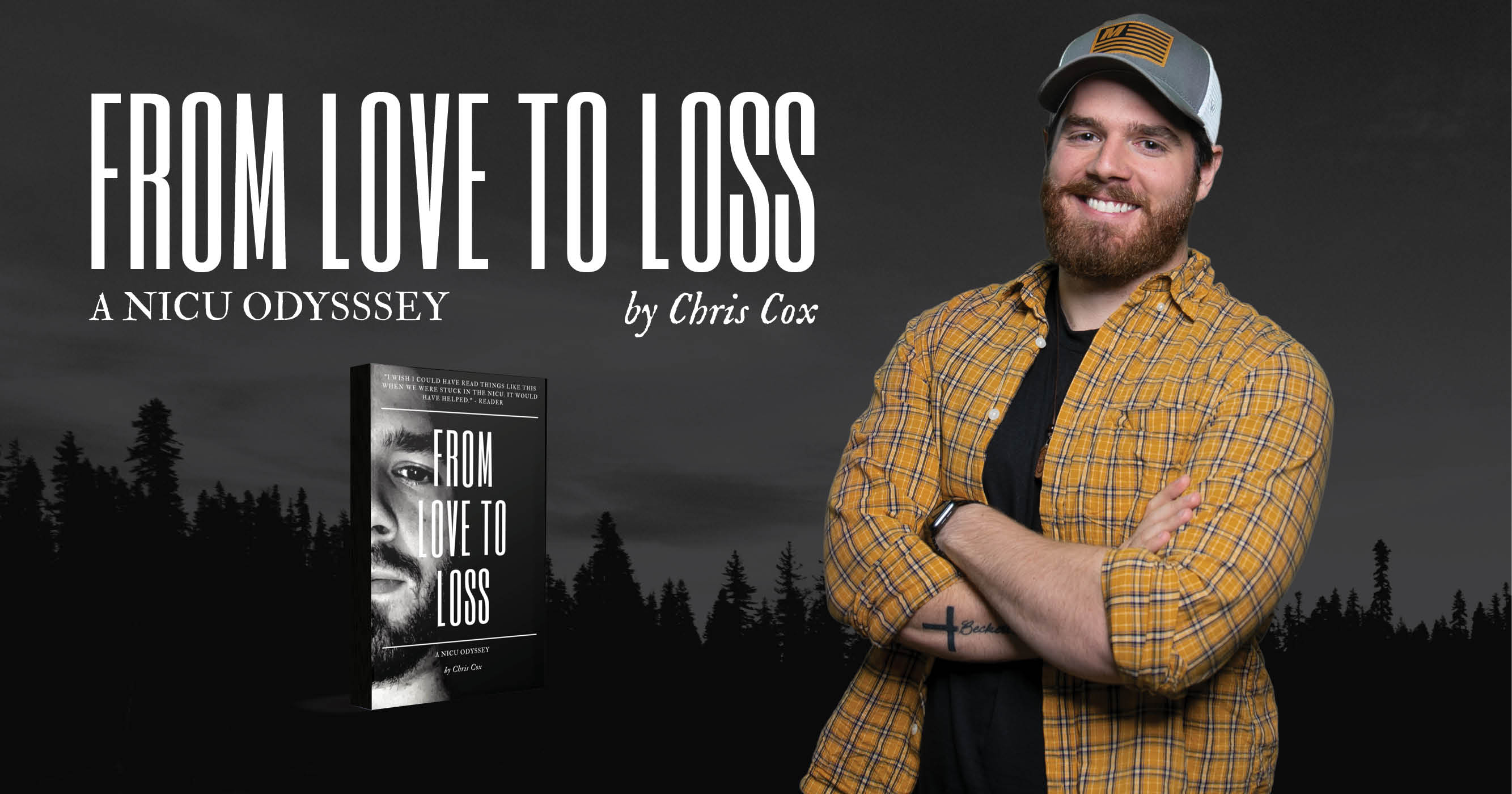 In honor of World Prematurity Day that took place Nov. 17, Chris Cox, Director of Web and Social Media at Westminster, donated a portion of the sales from his book to the Children’s Miracle Network.

Chris Cox, Director of Web and Social Media at Westminster College, recently published a book titled From Love to Loss: A NICU Odyssey.

The book chronicles the short life of Cox’s son, Beckett William Cox, who was born prematurely to Cox and his spouse, Shaina, on Jan. 28, 2019 — 15 weeks earlier than his due date. Beckett lived for seven months in the NICU at MU Women’s and Children’s Hospital in Columbia, MO.

Cox will discuss his 175-page heartfelt account of Beckett’s short but well-loved life at the Westminster Bookstore at noon on Wednesday, Feb. 12, 2020, in the Westminster College Bookstore. Copies of the book will be available for purchase.

Read more about the book and Beckett’s life below. And make plans to join Cox on campus at the book signing.

Please tell a little bit about your wife and yourself.

I’m from Atlanta, MO, a small, northeast Missouri farm community of about 400 people, and my wife is from Macon, MO. We got married on June 25, 2016, at Blue Bell Farm in Fayette, MO. We live in Columbia. Our parents were friends and attended each other’s weddings. I actually have the photo album from my parents’ wedding, and her mom and dad are in the first couple of photos. She works for Parkade Elementary School as a second-grade teacher.

What can you tell the Westminster community about Beckett’s birth and how he ended up in the NICU?

During pregnancy, my wife had Reversed-End Diastolic Flow, or REDF. Basically, the nutrients that should have been going through the umbilical artery to my son were starting to go back to my wife. It happens due to high blood pressure, or preeclampsia. This warrants an emergency C-section. I was a nervous wreck. I didn’t know what to do, what to say or how to act. My wife was amazing. I could tell she would be a wonderful mother just by how she approached everything thrown her way. When my son was born, he had to be resuscitated because he wasn’t breathing. They told us they’d hold him up so we could see him, but instead they walked right past us to the resuscitation room. We didn’t know what was happening, what he looked like or if he was alive. It was terrible. They finally came back in and said, “We were able to intubate.” I think I almost passed out.

Beckett’s stay in the NICU was rough, to say the least. Over those seven months, he got pneumonia more times than I can count. Every obstacle thrown his way, though, he beat. They just kept coming. In May, we almost lost him. The doctors told my wife and I they thought this was going to be it. He started getting better, but I became more of a wreck than I’d ever been. I didn’t know who to turn to. No one I looked up to or solicited advice from had been there. Then, by some miracle, my son started getting better. My wife and I no longer looked at his days as good and bad. We were just thankful there were days. One Sunday morning in August, my wife and I got a call at about six saying Beckett had a good night and was doing well. At about nine, we got a call saying he had taken a turn for the worse and they weren’t sure if he’d make it through this. We rushed to the hospital. After a rollercoaster of a day, my son succumbed to his prematurity and passed away. It was the hardest thing I hope my wife and I ever have to go through. We were living any parent’s worst fear.

When I think about my son, I think about how he approached life and not necessarily the circumstances surrounding his passing. I could never be more proud of anyone than I am of him. Chaos could be looming all around him. He could be getting poked with every kind of needle imaginable, and he’d still be smiling. He had one of those infectious smiles, where you couldn’t help but smile back, even when everything in your heart was making you feel like breaking down.

How did the idea for your book come about?

I actually started writing my blog — www.fromchristodad.com  — when I found out I was going to be a dad in August 2018. When my son was born in January 2019, I started seeing all these NICU families who were at a loss for words. They didn’t even know where to begin asking questions. My wife and I sort of fell into the question-asking role immediately, but I knew this didn’t come easy for everyone. I started writing my book as a how-to guide for NICU parents, as if such a thing could be written.

Who is the book designed to help?

The primary audience of this book is going to be parents and, more specifically, NICU parents. If you’re a person who has had to deal with worry and anxiety and struggled to cope, I think this book could genuinely help you. I think there is something in this book for everyone.

What types of responses have you received from others concerning your book?

The book hasn’t been out for long, but the response has been great. I sold hundreds of copies within the first couple of hours. I was never worried about the money I’d make from this, though. I only wanted to help as many people as I could. I’ve gotten a lot of positive responses from NICU medical professionals. They’ve seen what it’s like being a NICU parent, and it’s awful. Sadly, there aren’t many people who want to talk about it, so the reality is many of these parents feel alone. I think they’re happy someone finally wrote down what they were feeling, so other people have something to relate to and won’t feel as alone. I’ve also gotten positive responses from previous and current NICU parents. These responses mean the most to me, knowing my son’s story has helped other people find whatever peace they can in such a tough situation.

Where can From Love to Loss: A NICU Odyssey be purchased?

My hope is to eventually have this available wherever books are sold. Right now, it’s available on my website and on Amazon here (paperback) and here (Kindle version).