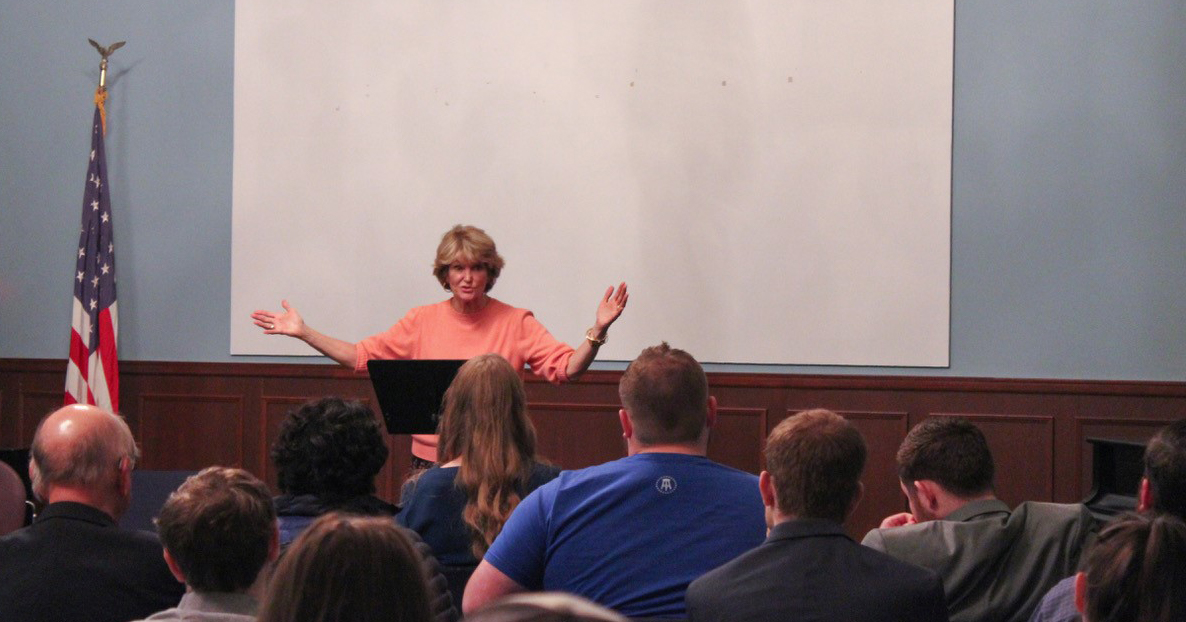 Bay Buchanan is a tiny, spry individual who speaks rapidly and doesn’t mince words, especially when it comes to her positive opinion of President Donald Trump. “He’s a street fighter and has done a lot for this country in three years,” the former U.S. Treasurer said Monday before a group of about 50 students. “I think he’s brilliant.”

Buchanan spoke in Hermann Lounge in Hunter Activity Center after dining with student representatives from the College’s Young Americans for Freedom (YAF) organization. The YAF led the charge to bring Buchanan to Westminster. 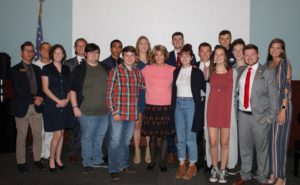 Bay Buchanan, center, spoke at 7 p.m. on Oct. 28 in Hermann Lounge in Hunter Activity Center. She visited with representatives from the Young Americans for Freedom at a dinner before the presentation and briefly after her talk.

Flying to Missouri from her home state in Virginia for the presentation was worth the time for Buchanan, who said she was impressed by the Westminster group.

“They are just wonderful students,” she said. “I’ve had a lovely time here.”

As president of The American Cause — an organization that promotes and supports basic conservative principles — Buchanan frequently speaks to groups of young people. During Monday’s lecture, Buchanan encouraged students to be leaders by speaking up when others may not agree with their opinions.

“The key is to start talking to others, even if you’re hesitant,” Buchanan said, emphasizing they should actively research opposing viewpoints. She added that intimidation should not be allowed and that freedom of speech should prevail.

Buchanan quickly discussed the core principles that make one a conservative and the role Republicans feel the government should fulfill, which she said varies from conservative to conservative.

In that vein, Buchanan said Reagan was a traditional conservative but that former President George W. Bush was a moderate. “He said he was a conservative and then raised taxes but later came out against affirmative action,” she reflected.

Once the youngest U.S. Treasurer in the history of a position dating back to 1775, Buchanan spoke about the importance of fair trade versus free trade. She further elaborated on her vast experience in the heart of Washington, D.C., politics.

Buchanan’s positions on Capitol Hill included stints as campaign chair in her brother Pat Buchanan’s three runs for president, as Mitt Romney’s senior presidential campaign advisor and as national treasurer during former President Ronald Reagan’s 1980 presidential campaign. That position led to her post as U.S. Treasurer, a job that involved concrete mathematical concepts which Buchanan said, as a woman, allowed her neutral access to politics.

“I was raised with seven brothers,” Buchanan added, explaining how she did not easily feel intimidated by men in politics.

Buchanan then said women bring different insights to hotbed issues. “It’s important to have women at the table,” she reflected.

Freshman Anna Bossaller from Washington, MO, says she was inspired by Buchanan’s discussion of women in politics.

“It was so wonderful to have a conservative woman speak on the topic of conservatism here at Westminster,” says Bossaler, who plans to double major in international studies and political science. “I appreciated that she addressed what it’s like to be a feminist and support women from a conservative standpoint.”