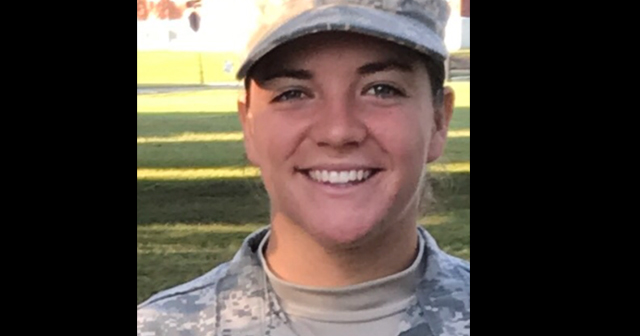 Emily Lucitt, ΚΑΘ, of Waynesville, MO, is the first ROTC scholarship recipient at Westminster College since the school revamped its U.S. Army ROTC program in 2017. The junior, who completed Cadet Summer Training in July at Fort Knox, KY, says she is excited about the scholarship.

”It can help a lot if you are looking for help with paying for college,” Lucitt explains. “My particular scholarship covers tuition and fees as well as provides a yearly book stipend.”

Although her scholarship is new, Lucitt’s experience with the military goes back a generation. Her father served in the Army for nearly 20 years, and her brother also was in ROTC as a student.

“So I was already familiar with the program. I was looking for help in paying for college, and ROTC seemed like a good way to go,” Lucitt says.

Adjunct Professor Captain Benjamin Hardy says Westminster’s revitalized Army ROTC program — in partnership with Lincoln University — is a boon for students, who traveled for more than 25 years to the University of Missouri-Columbia to take military science classes. That long-distance trek was the result of waning ROTC enrollment in the 1980s and early 1990s, with military budget cutbacks being one reason for enrollment decline. Westminster commissioned its last group of officers in 1991, although individual students continued to receive commissions for 26 years through the long-distance partnership with MU.

“In the spring of 2017, we sat down to see how to bring the program back here, with everything, including all of the classes the students need,” Hardy says.

He adds that since that time, military science class sizes increased from almost no students to about 15. Lucitt was one of the first.

“Emily was really eager to learn. She became a leader because she took military science just because she was interested,” Hardy says.

Lucitt subsequently completed Military Science 1 and 2. She is looking forward to her Military Science 3 class this fall not only because she enjoys the subject, but for the leadership skills she is acquiring.

“We learn how to become leaders in the classroom, in our schools, and in our communities,” Lucitt explains. “And we learn how to be future warrior leaders of the United States of America and live the Army values.”

Lucitt clarifies that those values are helping her find power in her purpose while at Westminster.

“I’ve been a part of sports teams all my life and have had a number of captain roles, but the leadership roles you take on in ROTC are different; it pushes you and challenges you to be better every day,” she says.

Military leadership is a strong Westminster College tradition: ROTC first was introduced to the school by President Harry S. Truman. Six years after Sir Winston Churchill’s famous Iron Curtain Speech, the Westminster trustee who first encouraged Truman to ask Churchill to speak at the College was at it again. In 1952, Trustee Major General Harry H. Vaughn persuaded Truman to write a letter to the U.S. Army, endorsing a Westminster ROTC unit. Truman complied, and the College immediately became the smallest four-year private college with an ROTC program.

Because of her positive experience with the small school’s mighty ROTC tradition, Lucitt encourages others to take a look at Westminster’s program. She says the process is much simpler than many think: students simply enroll in a military science class.

“Just taking an ROTC course does not mean you have to join the Army,” Lucitt emphasizes. “But I think having a small understanding of the military could be beneficial to anyone.”

However, Lucitt says that if students love the military science classes, they should be encouraged to apply for a scholarship, which can vary in length and amount awarded. Recipients also make an eight-year commitment to the U.S. Army, which includes active duty, Army Reserves, or Army National Guard.

“I would most definitely encourage other students to join ROTC,” Lucitt adds.

As for the Leadership and Business Communications major, Lucitt hopes to make the U.S. Army her career upon graduation in 2020. Meanwhile, she continues to play Blue Jay softball, serve in the Student Government Association, work as a Freshman Mentor, and serve on the Campus Activities Board.