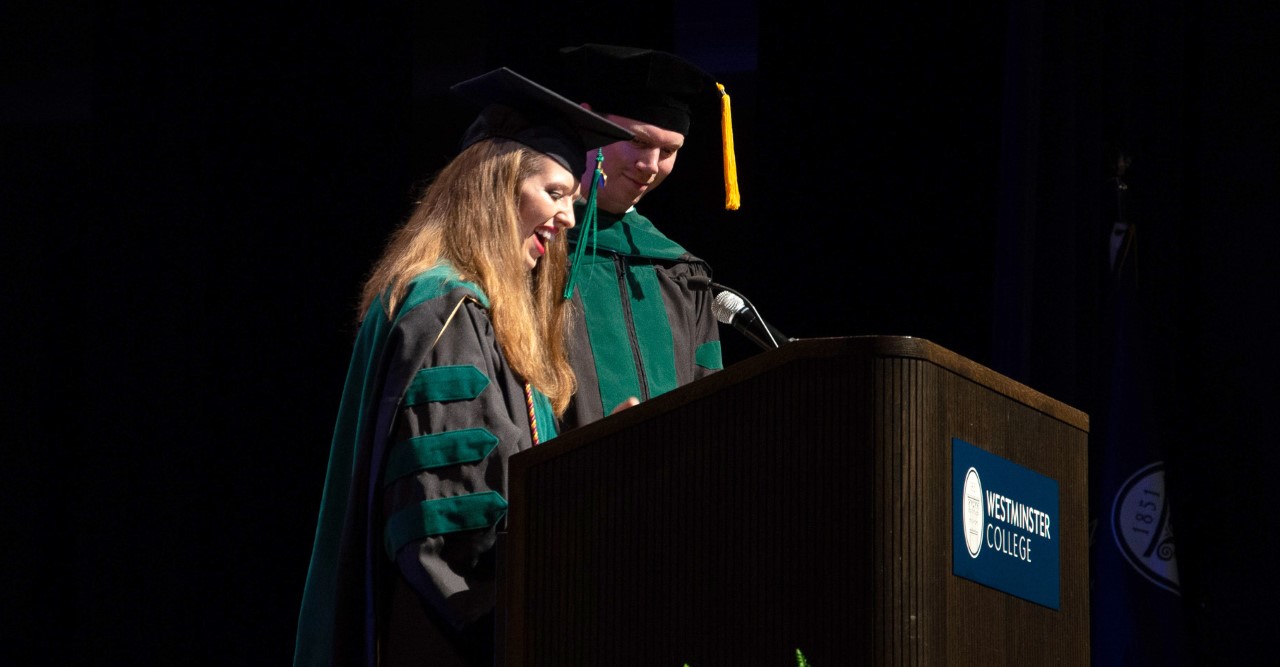 Westminster College kicked off Fall Semester 2019 with its time-honored New Student Convocation Ceremony at 3 p.m. on Saturday, Aug. 17, 2019. Nervous freshmen and transfer students first filed through The Columns and into Champ Auditorium for the Convocation Address.

Alums Matt Roehrs, DO, ’13 ΔTΔ and Misty Todd, MD, ’13, confidently reassured the expectant crowd that their purpose would become clear throughout the next four years at the College.

The dynamic medical duo were pleased to address the new students together — the couple married in August 2018.

And although the Columbia, MO, residents share the same undergraduate major, alma mater, graduation date, profession, and home, the two emphasized that they followed very different paths as Westminster students. Their message is that doing so is what makes the Westminster experience so special.

“Misty and I actually lived very different Westminster experiences, and we didn’t even begin dating until we graduated,” Roehrs explained, mentioning his Greek affiliation and involvement in Student Foundation and Student Ambassadors while pointing out that Todd led more of an activist role on campus, testifying before Senate with the Keep Me In College Coalition, helping turn Fulton into a smoke-free town, being an Independent actively involved in campus clubs, and finally receiving Westminster’s coveted Senior of the Year Award.

Todd maintained that she found her purpose at Westminster after overcoming fears similar to what others in the crowd were possibly experiencing. “I didn’t think I belonged. I was a country girl … I had grown up watching my parents work tirelessly to keep our family farm afloat,” she said, explaining that applying her work ethic at Westminster paid off. Along the way, both she and Roehrs learned to change their limiting mindsets about what they could accomplish.

“When I started saying ‘yes,’ opportunities kept coming, and I wanted to seize all of them,” Todd said.

Roehrs added that in addition to lifelong friendships and time spent as Delt president and travelling with friends internationally, he found his purpose in life while putting himself first as a student. “I knew I wanted to be a doctor. I spent countless hours in those buildings south of us, Reeves Library and Coulter Science Center, listening to the sounds of my fraternity living out another best night of their lives,” Roehrs reflected. He added that ignoring the music and friends’ texts eventually led to decent grades and his acceptance into medical school after graduating with a degree in biology.

Today Roehrs is a family medicine resident with the MU Health Care Continuity Clinic at South Providence Medical Park in Columbia. He earned a medical degree from A.T. Still University in Kirksville, MO, in 2018.

Todd is chief resident at MU Health Care’s Callaway Physicians Clinic in Fulton. She earned her medical degree from the University of Missouri School of Medicine in Columbia in 2017 after earning her degree in biology at Westminster.

The Convocation address by the couple, who also are President’s Club members, followed an invocation by Chaplain Kiva Nice-Webb, the U.S. National Anthem by a brass quintet, the presentation of the new class by V.P. of Enrollment Management and Student Services Ted Kulawiak, and a brief introduction by President Fletch Lamkin. Closing the ceremony, Barrett Houska ’20  sang the Westminster Alma Mater, Nice-Webb gave the Benediction, and Marshal of the College Dr. David Jones led the Recessional.

A livestreamed recording of New Student Convocation 2019 can be found here.

The Columns Ceremony that took place just prior to Convocation is a long-standing, beloved Westminster tradition. Led by Marshal of the College Dr. David Jones and the Skulls of Seven, the new students assembled on The Hill to listen to the Response for the Class of 2023 by freshmen Christa Gilman of Auxvasse, MO, and Arley Gale of Salem, MO.

Gilman, whose mother, Melissa Gilman, attended Westminster, said the College’s rigorous academics and small campus make the institution a perfect fit for her. 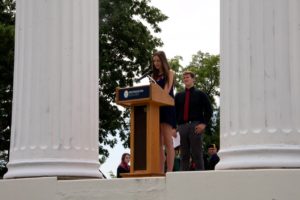 Gale emphasized why he chose to study at Westminster, pointing out the friendliness expressed to him on campus by faculty and staff members. Gale is a Robert Muehlhauser Award recipient. 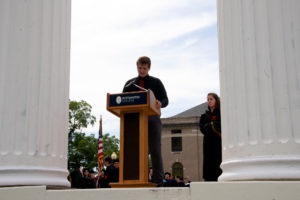 Both students addressed the crowd with the advice to work hard and seek significant accomplishments.

Before the freshmen and transfer students passed through The Columns — symbolizing their new beginning as Westminster students — Gilman said, “Together we can accomplish anything we set our minds to. Let’s make an impact on the world!”