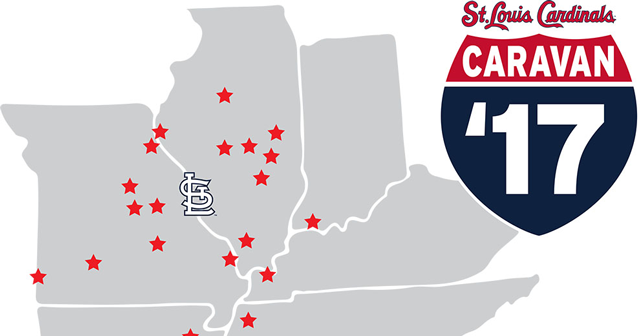 Due to the severe winter weather forecast and anticipated icy road conditions on Saturday, the Cardinals Caravan stop planned for Saturday, Jan. 14 has been CANCELLED.

Additionally, they’ll be joined by Jason Simontacchi, pitching coach for the Cardinals minor league team, the Peoria Chiefs, and former Cardinals Kerry Robinson, of St. Louis, who serves as a Cardinals scout. Cardinals broadcaster John Rooney will emcee the event, which is free and open to the public.

The Cardinals Caravan, sponsored by Missouri Farm Bureau Insurance, will begin at 5 p.m. in Mueller Leadership Hall on campus. Attendees will have a chance to talk Cardinals baseball with the players, who will also discuss the upcoming season and host a question and answer session following their presentation.

The first 400 children ages 15 and younger through the door on the day of the event will receive a free autograph ticket, which guarantees one autograph from each current and former Cardinals player in attendance. Eligible children should bring an item to be autographed such as a baseball or baseball glove.

Unfortunately, due to high demand, autographs will only be available for the eligible group of children age 15 and under at the event.

The Cardinals will also bring several silent auction items to be sold with the proceeds to benefit Westminster’s Student Athlete Advisory Committee, which sponsors educational and promotional programing and the Westminster College intramural program.

Following the Caravan session, a ballpark-style meal will be available for attendees in the Mueller Student Center from 5 p.m. – 7 p.m.  The cost for faculty, staff, students not on a meal plan and visitors is $8.00 for adults and $4.00 for children 12 and under. Those planning on eating the ballpark meal should RSVP by Tuesday, Jan. 10, to alumni@westminster-mo.edu.

Attendees can also plan to spend the afternoon before the Caravan watching sports by attending the men and women Blue Jay basketball games against Eureka College at 1 p.m. and 3 p.m. in the Historic Gym.

Founded in 1851, Westminster College in Fulton, MO is one of the top liberal arts colleges in America, according to major educational ranking firms, including U.S. News & World Report, Forbes magazine, The Princeton Review and Washington Monthly. Westminster is a challenging academic environment where students are educated to lead and inspired to achieve. Ninety-six percent of Westminster graduates start their first job or enroll in graduate or professional schools within six months of graduation.

To find out more about Westminster College, go to www.westminster-mo.edu.