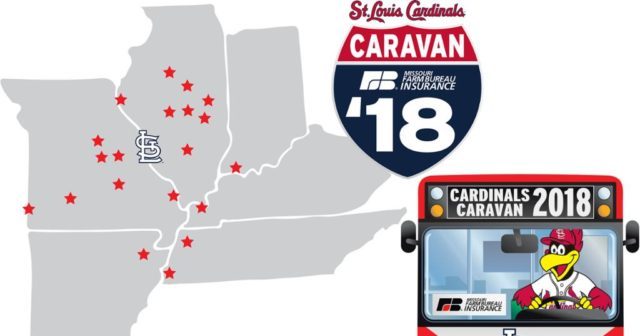 Play-by-play broadcast announcer John Rooney will emcee the event and will be joined by centerfielder Harrison Bader, pitchers Jack Flaherty and Josh Lucas and third baseman Patrick Wisdom in Backer Dining Hall of the Mueller Leadership Hall on campus. Outfielder Tommy Pham and St. Louis Cardinals Network team member Mike Claiborne will also be in attendance, joining the Fulton visit due to the weather cancellation of another leg of the tour.

This popular event, which allows the current Redbirds players, Cardinal alumni and broadcasters to talk baseball and visit with their fans, is open to the public and free of charge. Doors will open at 5 p.m.

The first 400 children ages 15 and under through the door that day will receive a free autograph ticket. This ticket guarantees one autograph from each current and former player in attendance. Eligible children should bring an item to be autographed such as a baseball or baseball glove.

Unfortunately, due to high demand, autographs will only be available for the eligible group of children age 15 and under at the event.

As a part of the tour, the Cardinals Caravan is partnering with Feeding America to fight childhood hunger.  Attendees are asked to bring nonperishable foods and canned goods to drop off in bins provided at the event.

Attendees will also have the opportunity to enter a 50/50 raffle for Cardinals tickets and other prizes. The proceeds will go to Westminster’s Student-Athlete Advisory Committee, which sponsors educational and promotional programming.

A table will be on hand where attendees can buy tickets for $15 to attend Westminster College Night at Busch Stadium when the Cardinals play the Philadelphia Phillies at 6:15 p.m. on Thursday, May 17.

Westminster alumni are requested to rsvp for the event at alumni@westminster-mo.edu.

Cardinals Caravan is sponsored by Missouri Farm Bureau Insurance. The Redbirds are scheduled to make more than 20 stops over four days in six different states from Jan. 12-15.