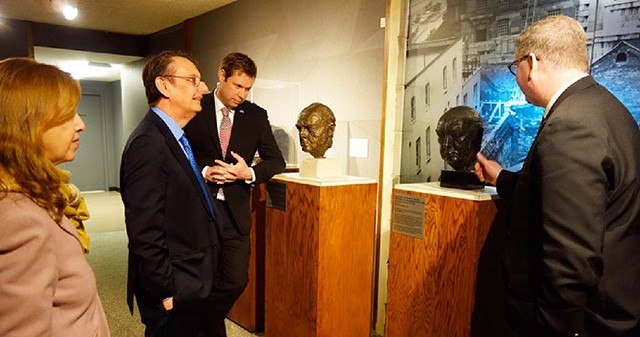 Newly appointed British Consul General in Chicago John Saville, along with his wife and Honorary Consul for Missouri Mark Sutherland, toured the National Churchill Museum during a visit to Fulton on April 4. The group made the stop following Saville’s address to the Missouri House of Representatives in Jefferson City.

Among the places they viewed on campus were Washington West, the Historic Gym, the Museum and St. Mary the Virgin, Aldermanbury.

In his Jefferson City address to the House of Representatives, Saville directly referenced his impending Westminster visit. Immediately after, he credits Westminster as the birthplace of the famous phrase “special relationship” describing the connection between the U.S. and the U.K.

“So, it was here, in Missouri, in the same stroke of oratory genius for which he’s well remembered, that Churchill coined both the phrases ‘Iron Curtain’ and ‘special relationship,’” Saville said. “Each has had a profound impact on how we view the world, and each has had particular resonance for me personally in my career.”

Additionally, in his speech, Saville said this trip to Fulton will be “the first of many trips to Missouri” to build upon the “rich existing ties between this state and the U.K.”