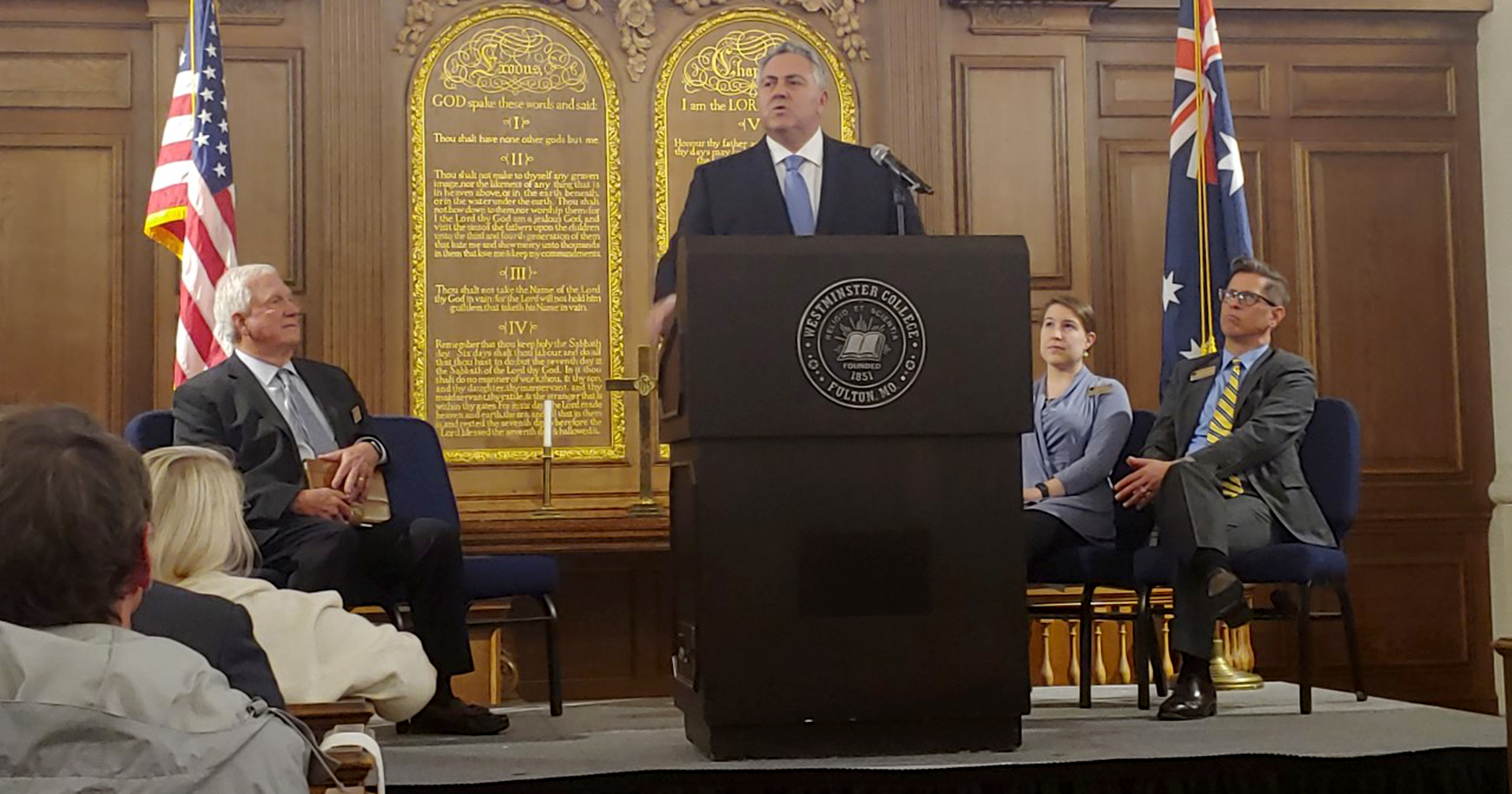 In an interview with the St. Louis Post Dispatch immediately following last night’s address before a crowd of about 100 people at Westminster College, The Honorable Joe Hockey confirmed that Australia is cooperating with an FBI investigation into Trump’s election campaign relationship with Russia. From left, President Fletch Lamkin, Hon. Joe Hockey, Reverend Kiva Nice-Webb and Dr. Jeremy Straughn.

The Honorable Joe Hockey, Australia’s Ambassador to the United States, drew a correlation between today and the impending Cold War era when Winston Churchill spoke at Westminster College 73 years ago.

“We are living in ‘anxious and baffling times,’” Hockey said, quoting Churchill directly during the Third Annual Cherry-Price Leadership Lecture on Thursday, Oct. 24, in the Church of St. Mary the Virgin, Aldermanbury.

Hockey’s riveting lecture titled “The Sinews of Prosperity: In Defense of Free Trade” immediately made headlines in The Sydney Morning Herald, St. Louis Post-Dispatch and a variety of other newspapers, focusing on his comments concerning President Donald Trump’s trade and tariff policies.

Hockey’s overarching message: Free trade must prevail in order for the United States to continue to thrive economically.

“When Winston Churchill stood here to deliver his speech, trade represented just 10 percent of the U.S. economy and supported far fewer jobs than it does today,” Hockey said. “Now, more than ever, the United States should be leading the debate in favor of free trade. Tariffs should only be used as a very short term tool to force change in the behavior of recalcitrant WTO [World Trade Order] members.”

Hockey went on to say that America’s values — Western values — won the Cold War and that Communism cannot pay for itself.

In describing challenges to free trade, Hockey cited critics who rely on “sentimentality and fear rather than hope and prosperity.”

Further in his lecture, Hockey conceded that Trump is attempting to do all that is possible for fairer global trading. He added emphatically, however, that isolating the U.S. economy from trade with other countries is “a tool that should be used very cautiously” and eventually leads to a bigger government that controls prices and access to goods.

“Being open to the world made America great in the first place. It will keep you great,” Hockey said.

He later described the crisis facing U.S. farmers and admitted that job losses in farming and other industries as a result of a changing economy must be addressed. Hockey pointedly asked, “How do you address the visual of an out-of-work mining family or a farmer burying their worthless crop?”

After the open-ended question, Hockey concluded that, ultimately, the world economy is thriving compared to past decades.

“The facts are that we have a better quality of life today than that of our parents,” he said. “There is still much work to be done to improve our environment and provide more equality of opportunity … but without prosperity, nothing in this world is achievable, and to achieve prosperity, we need free and fair global trade.”

After the lecture concluded, Fletch Lamkin, President of the College, reflected that Hockey’s Cherry-Price Leadership Lecture represents the very best of a Westminster education.

“The world leaders who regularly speak on our campus are living, breathing examples of how Westminster consistently stands prominently on the world stage,” Lamkin says. “Our lectureships are a strong component of our vibrant liberal arts education that guides students today to become leaders of tomorrow.”

To view Hockey’s speech in its entirety, go to Westminster’s YouTube page here.

Established in 2017, the Cherry-Price Leadership Lecture is an annual event that shines the spotlight on the character traits of successful leaders of our time. Made possible through the generosity of distinguished alums Howard H. Cherry III, ’65 ΒΘΠ, and Robert W. Price Jr., ’65 ΒΘΠ, the lecture is designed to reinforce Westminster’s mission of helping students find their purpose, aiding them in transforming from learners to leaders.