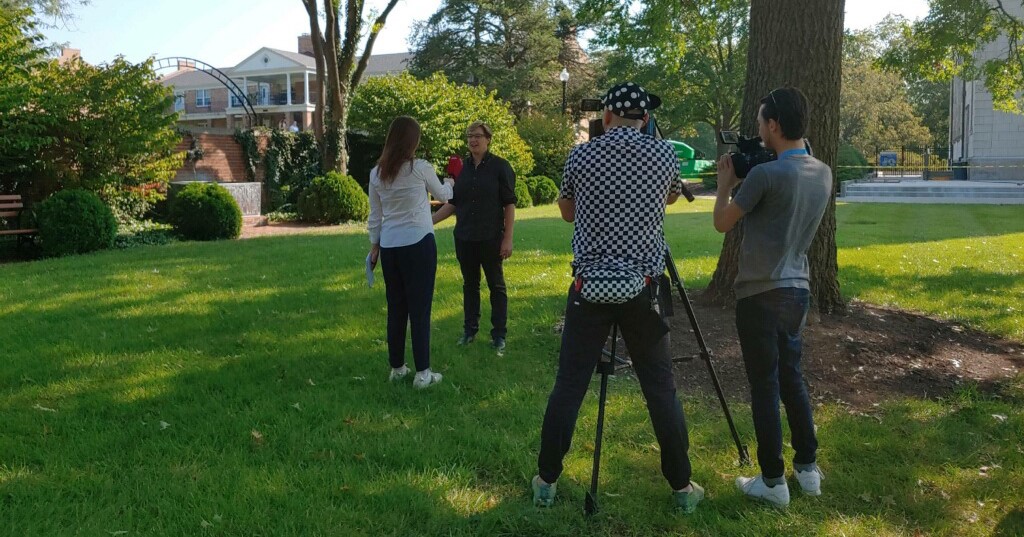 Westminster College boasts some of the most devoted alums a college or university could ask for. Case in point: When Westminster Alumnus Mikhail Orlov, ’96 ΒΘΠ, recently was interviewed by independent Russian news network RTVI, he suspected the network might be interested in learning more about Westminster and its significance in today’s world.

Aware that former U.S. Secretary of State Dr. Madeleine K. Albright would deliver the 59th John Findley Green Foundation Lecture on campus on Sept. 19, the Russian native who currently lives in Flower Mound, TX, swiftly put the crew in contact with the College. 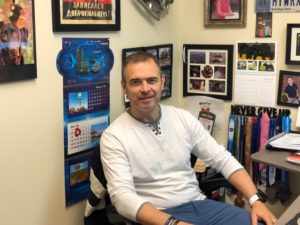 Mikhail Orlov, above, in his office in Texas. Orlov is originally from Moscow.

The rest, as they say, is history.

The media trio — made up of Reporter Tanya Lukyanova, Producer Simon Lobačev and Videographer Zaal Chichua — braved a four-hour delay out of New York to arrive in Missouri on Sept. 17 to cover the Sept. 18-19 Hancock Symposium, which ended with the Green Lecture.

First on their docket was Reality TV Executive Gretchen Kinder, ’94 ΚΑΘ, who Lukyanova enthusiastically asked questions regarding Kinder’s time working with President Donald Trump before his presidential days while working on his show The Apprentice.

The RTVI news clip here (fast-forward to the 29-minute mark) also includes Lukyanova’s summary of the annual Symposium’s historical background and a rundown of famous Green lecturers to visit Westminster, including Winston Churchill.

How do we know what the crew is communicating here? Again, Orlov to the rescue. The entrepreneur and business co-owner featured recently by Westminster here summarized the commentary and assured us the segment was “a very complimentary overview.”

Next, in this 23-minute, 35-second video clip, the crew pans the incoming Green Lecture crowd. Watch for a glimpse of Board of Trustees Member Brock Ayers, ’82 ΔΤΔ, a brief view of Nobel Laureate Dr. George Smith and a lengthy interview with Churchill’s granddaughter, Churchill Fellow and Breakthrough Artist Edwina Sandys. 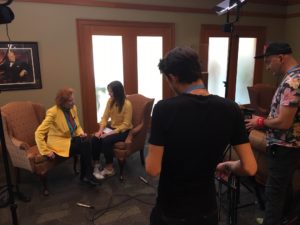 Orlov says that at one point, the RTVI host asks Lukyanova to describe what she thought of the Symposium. The 24-year-old reporter with a master’s degree from the Columbia University School of Journalism in New York responded favorably. Orlov summarizes, “Her answer was that this was a very unique opportunity to gain access to the people and speakers that she would not normally be exposed to, and she welcomed the opportunity to learn from unique viewpoints on current world events.”

Next, Lobačev tells a humorous story in which he quietly approaches Albright during a luncheon to ask her to sign his book. Not only was he thrilled that she signed it for him, but to his amazement, she also agreed to take a selfie with him.

“Overall, it was good coverage of the event and for Westminster’s reputation among Russian-speaking viewers of RTVI,” Orlov explains.

As an independent news organization that is not affiliated with the Russian government, RTVI is available worldwide online and via satellite and cable TV throughout North America, Europe, the Middle East and other regions around the globe. Unsurprisingly, RTVI is not broadcast in Russia. Nonetheless, its potential reach is 50 million households worldwide. RTVI’s online news portal is viewed by 15 million users per month.

With RTVI’s impressive statistics in mind, Orlov adds, “I am glad they decided to send a TV crew.”

And so is Westminster College.

Many thanks to Orlov and RTVI for shining the spotlight on what Westminster historically does best — the College consistently brings renowned leaders to campus to educate and inspire world leaders of tomorrow.