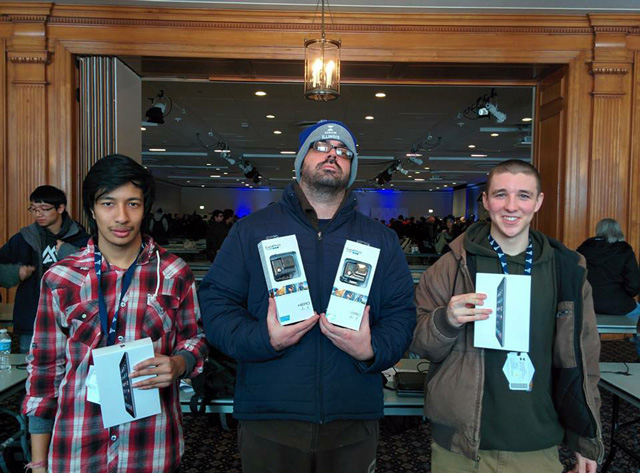 Above, Westminster students Manohar Pradhan, Chad Doebelin, and Jon Antel with their prizes at the Illinois Hackathon.

Earlier this spring semester, members of Westminster’s Association for Computing Machinery Tyler Heinrich, Jordan Colgan, Jon Antel, Manohar Pradhan, and Chad Doebelin climbed aboard a chartered bus and joined other area college students on their way to the University of Illinois at Urbana-Champaign’s annual Hackathon event.

Hosted by Major League Hacking (MLH), the Illinois event was an all-expense paid, bring-your-own-sleeping-bag-and-laptop weekend with little to no sleep, energy drinks, and an intense 36-hours of competition.

Coding started at 10 p.m. Friday night and didn’t stop until 10 a.m. Sunday. Midnight snacks brought in by sponsors, such as 2000 cookies from Apple, helped keep students going amidst hard-core creative brainstorming, keyboards buzzing, and the artificial glow coming from tech devices and laptops.

Apple, Google, Facebook, Dropbox, and Goldman Sachs are among the sponsors that funded the Illinois event – and support others like it across the country – giving students valuable time to create technical products and put what they have been learning in the classroom into practical application. Sponsors offer challenges for the students to jump on – with prizes to incentivize their work – and follow up to discuss internships and careers.

Students must apply and be selected to attend the event.

“Everyone’s doing something different,” Antel says about the hackathon. “Some get some sleep; some try to stay up for 36 hours.”

Antel says he managed about 5 hours of sleep each night. “Sleep’s important,” he says. “You don’t want to crash at the end of the showcase. Everyone has to present.”

An Information Technology major, Antel says they didn’t know what they would come up with when they arrived at the Hackathon. “We thought about what would be useful in today’s world,” he says about their creative process.

“You have to keep an open mind. Five hours in, you might realize that this isn’t going to work,” Antel says. “You have to have back-up ideas.”

“A few hours in, we thought – yeah, this has good potential,” he says about the program he and teammates Pradhan and Doebelin came up with during the Illinois hackathon.

The Westminster trio was right – and two of the sponsors agreed. They won first place prizes from Meru Networks and Nuage Networks:

Their project, Gatekeeper, enables users to instantly block Internet traffic on a network by simply calling a phone number. Applications might include use by parents to restrict Internet access for kids or by companies who need to immediately shut down traffic due to suspicious or malicious activity.