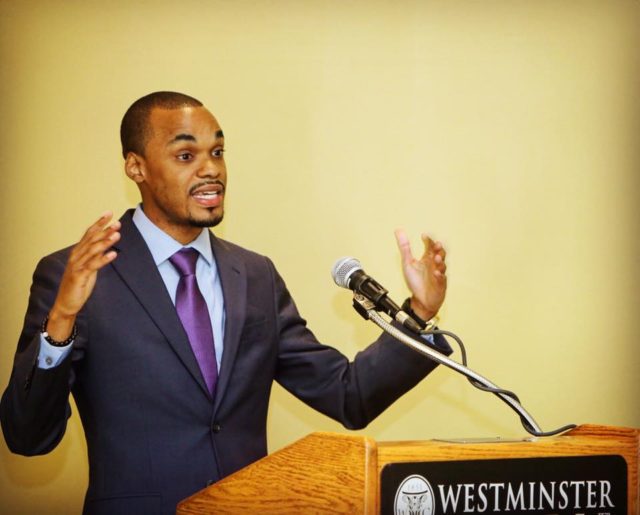 Westminster freshmen will begin their college experience with an inspirational talk by alumnus Derick Dailey ’11 at Freshman Convocation August 19 in Champ Auditorium.

Born in Little Rock, AR, Dailey recently completed a J.D. (Doctorate of Jurisprudence) at Fordham University School of Law in New York City and is currently studying for his bar exams. Previously, he earned a Master of Arts degree in religion and ethics as a Dames Scholar at Yale University in 2014.

He has also served as the James E. Johnson Legal Fellow at the Brennan Center for Justice at NYU School of Law, a summer intern at a St. Louis commercial litigation firm and a legal intern for the U.S. Attorney Office in the Eastern District of New York.

“I am honored and excited to return home to share in this momentous experience with the class of 2021,” says Dailey. “Wherever I am in the world, Westminster comes with me. My character, my vision of the world, and my purpose were cultivated and enriched at this school.”

While earning his bachelor of arts in political science and religious studies at Westminster, he served on a team that won a $10,000 grant to go to Ethiopia to build a library, and he was instrumental in founding a poverty initiative program where student volunteers took dining hall leftovers to local centers to feed senior citizens and those in need. His achievements so impressed the head of the international organization Bread for the World that he helped Dailey become a member of the organization’s board of directors while still a student.

Once leaving Westminster, Dailey followed his passion for racial and social justice, serving a year as a member of the Teach for America Corps in the Mississippi Delta.

In 2013, Dailey returned to Westminster to deliver the keynote address at the President’s Dinner. He told the capacity crowd: “The audacity to dream is what Westminster does for young minds. Here, at Westminster, we dare to believe that today can be better than yesterday and that tomorrow is full of endless possibilities to do good for all people.”

Dailey has also served on the board for the Alliance to End Hunger, the Board of the Rudd Center for Food and Obesity at the University of Connecticut and on the executive committee of the Yale Black Alumni Association.  He served as the Board Chair and Chief Executive Officer for the National Black  Law Students Association.

He is a prolific writer and his academic writings have appeared in numerous publications and professional academic journals.

He attended the 10th Assembly of the World Council of Churches in Busan, South Korea, as a North American delegate of the Global Ecumenical Theological Institute.