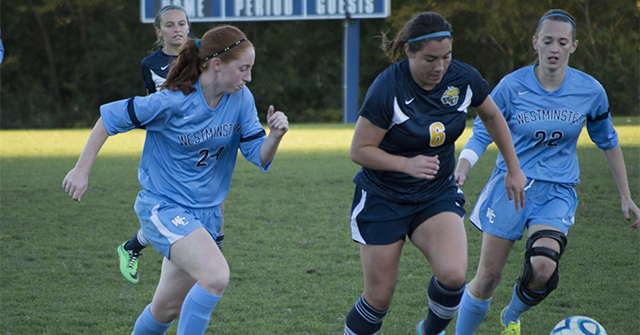 The Westminster women’s soccer team faced #1 Webster University in the semifinal round of the St. Louis Intercollegiate Athletic Conference (SLIAC) Tournament on Wednesday evening. The #4 Westminster Blue Jays were defeated, 2-1, ending their season with an overall record of 8-7-2.

The Webster Gorloks were able to get off three shots before the Blue Jays could take one, but Westminster’s sophomore goalkeeper Ellen Woolsey stopped each one. Junior Eileen Koppy took a shot on goal in the 19th minute, but the Gorloks’ keeper was there to stop it.

The Blue Jays took two more shots, but were unable to find the net. Webster took a shot on goal in the 25th minute, but Woolsey made the save to keep the game scoreless.

Heading into halftime, the game remained 0-0.

Webster took a shot on goal in the 57th minute, but Woolsey punched it out. Webster took control of the ball and shot again, scoring the first goal of the game this time.

The Blue Jays took one shot that went wide, while Webster managed to take two shots on goal in the next 15 minutes. In the 76th minute, Koppy passed the ball up to junior Ashley Schimmel. Schimmel placed the ball into the back of the net, tying the game with just 14 minutes remaining in the semifinal game.

Webster scored again in the 71st minute, taking the 2-1 lead. The Blue Jays were unable to get another shot off, ending the game 2-1.

Woolsey (7-7-2) faced eight shots throughout the 90 minutes of play and allowed two goals.

The Blue Jays end the season in the SLIAC Tournament with a 52.9 winning percentage. They finished conference with a 5-2-2 record, winning the most conference games since 2001.