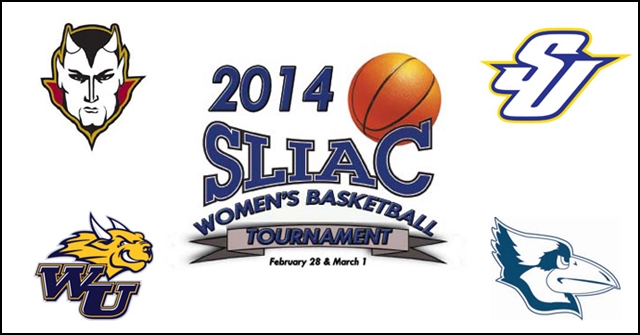 For the sixth consecutive season, the Westminster women’s basketball team is heading to the St. Louis Intercollegiate Athletic Conference (SLIAC) Tournament. This year’s tournament will be held in Louisville, Kentucky at the campus of Spalding University. The semifinals games will take place on Thursday, February 27, with the championship game on Saturday, March 1.

The tournament includes the top four finishers in regular season conference play, Eureka College, Spalding University, Webster University and Westminster College, with the tournament champion earning an automatic qualifying bid to the NCAA Tournament. Eureka and Webster will play at 6:00 p.m. EST, followed by Westminster vs. Spalding at 8:00 p.m. EST. The championship game time is TBD.

The Blue Jays have called themselves the SLIAC Tournament Champions for two straight years and have made it to the tournament championship game for three consecutive years. They are making their 14th tournament appearance.

To watch and listen to the games live, click here.