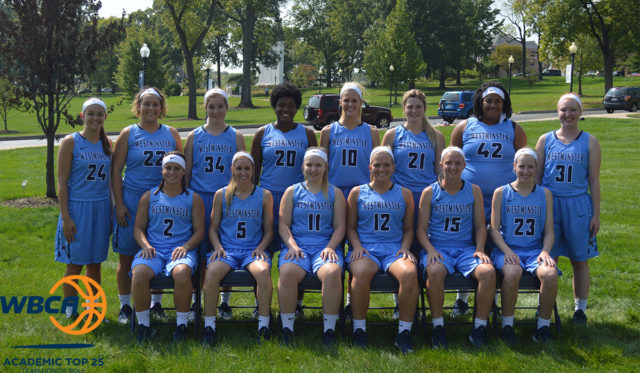 Westminster women’s basketball posted the 17th-best grade point average among NCAA Division III teams in the country, marking the eighth time the team has made the list and the seventh consecutive time.

The squad posted a team GPA of 3.604 this season to make the list and were the only member of the St. Louis Intercollegiate Athletic Conference in the top 25.

“I was very very pleased with our ladies’ effort in the classroom,” said Westminster Head Coach James Arnold. “Long before I arrived, the program has established a culture of being great on and off the court. I am so thankful to be able to do my little part in helping our academic success continue.”

The Blue Jays are coached by Arnold and assisted by Clifton Cooper, Talisha Washington, Keener Tippin, and Matt Moore along with student manager Hannah Macon.

Dr. Cliff Cain serves as the faculty sponsor for the team.

The WBCA Academic Top 25 recognizes NCAA Division I, II and III, NAIA and two-year GPAs inclusive of all student-athletes on their rosters for the entire season.

“The WBCA is pleased to recognize those women’s basketball programs that have committed themselves to excellence on the court and in the classroom,” said WBCA Executive Director Danielle Donehew.  “The 119 teams we honor this year strive to achieve all-around success and we commend their efforts. Congratulations!”