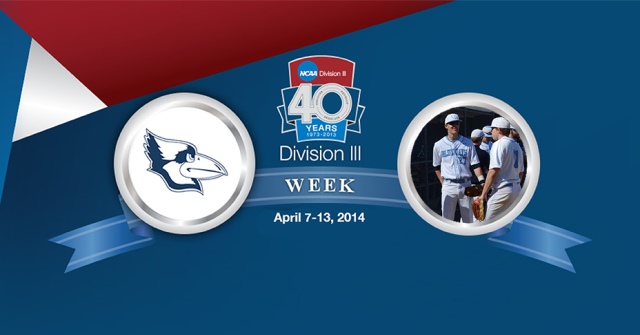 Westminster College is set to join the other 441 NCAA Division III schools in celebrating the 40th anniversary of Division III. D III Week is taking place on April 7-13, 2014.

The Westminster Blue Jays are kicking off Division III Week on Monday, April 7, with a student-athlete picture at the columns at 5:30 p.m., followed by a get-together in the Historic Gymnasium with free giveaways.

Tuesday evening the Student-Athlete Advisory Committee (SAAC) is co-sponsoring the annual Dress For Success Fashion Show with Career Development. Eight student-athletes will be demonstrating what appropriate and inappropriate business professional and business casual attire is in a fashion show form! The show begins at 6:00 p.m. in the Coulter Science Center Lecture Hall.

On Wednesday, April 10 we are having trivia and giveaways at the baseball and softball doubleheaders versus Fontbonne. The first pitch of the games will be thrown out by members of the 2013 Sweet 16 qualifying Westminster men’s soccer team.

Each team is going to be honored at Westminster’s TGIF on Friday, April 11. SAAC will also begin their canned food drive at the event.

The Blue Jays will close out Division III Week on Saturday, April 12, with the canned food drive at the baseball and softball doubleheaders. Softball begins at 12:00 p.m and baseball begins at 1:00 p.m.