McDonough and Ogar Named Westminster Athletes of the Year 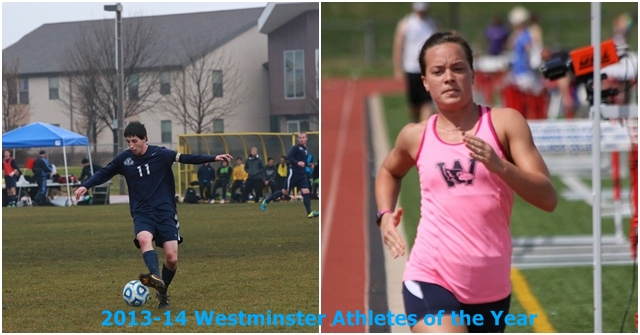 Westminster College seniors Michael McDonough and Sarah Ogar have been named the 2013-14 Westminster Male and Female Athletes of the Year.

Michael McDonough (St. Louis, Mo. /DeSmet Jesuit), a senior men’s soccer midfielder, was selected as the Westminster Male Athlete of the Year. McDonough graduated in May with a Bachelors in Economics and Business Administration. He  was named to the 2013 National Soccer Coaches Association of America (NSCAA) NCAA Division III Men’s All-Central Region Second Team and to the St. Louis Intercollegiate Athletic Conference (SLIAC) All-Conference Second Team after being a strong component in the team’s first ever Sweet 16 appearance in the NCAA Tournament. He finished the season with a .528 shot on goal percentage, and he posted nine points with three goals and three assists throughout the season.

Sarah Ogar (Mexico, Mo. /Mexico), a senior cross country and track and field runner, was selected as the Westminster Female Athlete of the Year. Ogar graduated in May with a Bachelors in Biology.  She is a Chi Alpha Sigma, the National College Athlete Honor Society, member and a Dean’s List student. She was named to the 2013 SLIAC All-Conference First Team in cross country, and in track and field, she took first place in the 800-meter run at the SLIAC Invitational. Throughout the 2014 season, Ogar broke two school records. In the indoor season, she was a part of the 4×200-meter relay team that set the 4×200-meter relay record. In the outdoor season, she set the 400-meter dash record.

Congratulations to the 2013-14 Athletes of the Year!