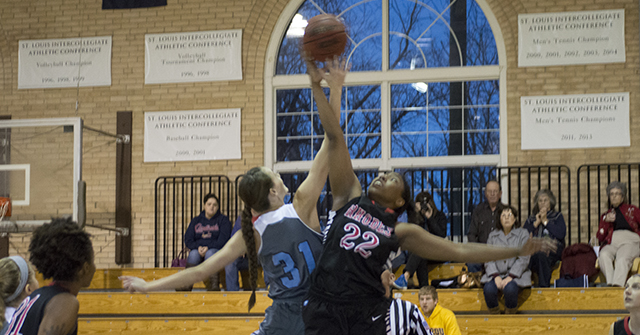 Despite the second half comeback, the Westminster women’s basketball team could not surpass the Rhodes Lynx on Monday evening. The Westminster Blue Jay’s 66-52 loss brings them to 2-4 on the season, while the Lynx improve to 7-1.

“Rhodes is a quality program; they are very physical and well coached,” stated Head Coach Tracey Braden. “The main reason we schedule them is because I know it will make us better for conference competition.”

Sophomore Krista Armontrout stated after the game, “we played hard and kept working the whole game.” Armontrout ended the game with 10 points and six rebounds.

The Blue Jays tied the game up 4-4 with a short jumper in the paint by Armontrout two minutes in. The Lynx sparked a 7-0 run before the Blue Jays called a timeout, but they came out and continued their run, scoring 10 more points. The 17-0 run over the span of six minutes was ended when junior Sadie Theroff knocked down a three-pointer.

A layup by sophomore Andrea Zalis put the game within 10 points with 3:37 remaining in the half, and two good free throws by Armontrout brought the Blue Jay’s deficit into single digits, 27-19. Rhodes closed out the half with two baskets in the paint, sending the game into halftime with the Lynx leading 31-19.

Zalis hit a three-pointer coming into the second half to cut the game back into single digits. Two made free throws by Zalis started a 9-0 run to bring the game within two points just four minutes into the second half, 33-31, but Rhodes put up seven points to put them up by nine.

Junior Kasey Gatson dished the ball into Armontrout in the post. She was fouled on the way up, made the bucket and drained the free throw to put the game back within six points with 14 minutes remaining in the game.

The Lynx hit a 7-2 run to put the game back in double digits, but the Blue Jays continued to battle it out. Four good Blue Jay free throws in a 20 second span put the game within seven, 52-45, with nine minutes remaining. The Lynx struck another 7-0 run, and with three minutes remaining in the game, Rhodes held an 18 point lead.

Theroff stole the ball and was fouled on the fast break in the final minute of the game. She hit both from the line, ending the game with a 66-52 loss.

“There’s just a few things we need to improve on, like getting on the boards,” commented Armontrout. The Blue Jays were out-rebounded 51 to 35.

Zalis led the Blue Jays with 12 points and nine rebounds.

“I really love working with this team,” Coach Braden said. “They work hard, they care and they desire to improve.”

Armontrout added, “It was a good game for us to improve on and we will be ready for Saturday.”

The Blue Jays host Blackburn College on Saturday at 3:00 p.m. for their third conference game of the season.