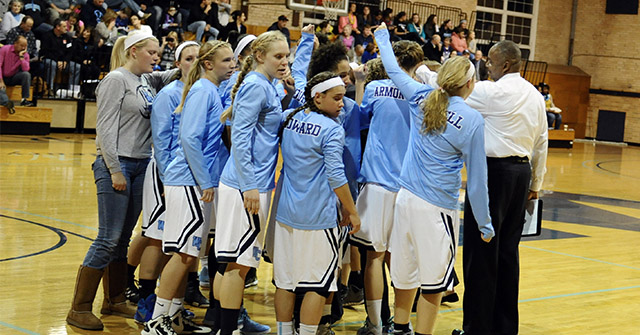 “We were able to prove to ourselves that we can play a full game without backing down,” stated junior guard Tylere Goans when asked about the win.

Head Coach Tracey Braden added, “I’m thankful that we won. It wasn’t always pretty, but sometimes you just have to grind them out. Danielle Smulczenski came in and pulled down some critical boards for us.”

The Blue Jays took an 11-6 lead over Principia to start the game before the Panthers called a timeout. The Blue Jays took a 17-10 lead with 13:23 remaining in the first, but the following four minutes neither team was able to score.

Sophomore Krista Armontrout broke the silence with a jump shot to take a nine point lead with 9:02 on the clock.

In the final minute of the half, Goans hit two from the foul line to put the Blue Jays back up by 10, 28-18. Junior Mackenzie Haddox went 1-2 to take an 11 point lead, and with 00:07 on the clock, junior Kasey Gatson drained a three pointer to send the Blue Jays into halftime leading 32-20.

Principia came into the second half strong, putting seven points on the board within the first minute and a half. The Blue Jays came out of the timeout and extended their lead back to 10, 37-27.

Principia put the game within four points with just under 10 minutes to play, but sophomore Andrea Zalis hit a jumper and her foul shot to put the Blue Jays back up by seven, 45-38. A jump shot and free throw by senior Danielle Smulczenski, followed by two more free throws by Zalis, gave the Blue Jays a 12 point lead, 50-38.

Gatson put in a shot with 6:10 left in the game to take a 14 point lead over Principia, but the Panthers battled to put the game back within 10. The Blue Jays held strong and defeated the Panthers 63-52.

The Blue Jays forced Principia to commit 21 turnovers. They had 14 steals and only committed 11 turnovers.

“We were really aggressive tonight, but we also know that we have to work this week to shoot the ball better from the free throw line for Saturday’s game,” added Goans. The Blue Jays shot just 41.4 percent from the foul line.

“We did great on getting to the line, but we didn’t take advantage of the free opportunities,” commented Coach Braden.

Gatson went 6-10 from the field to lead the Blue Jays with 15 points. Armontrout led the team with seven rebounds, while Gatson pulled down five. Haddox added 11 points, three assists and four steals to the win.