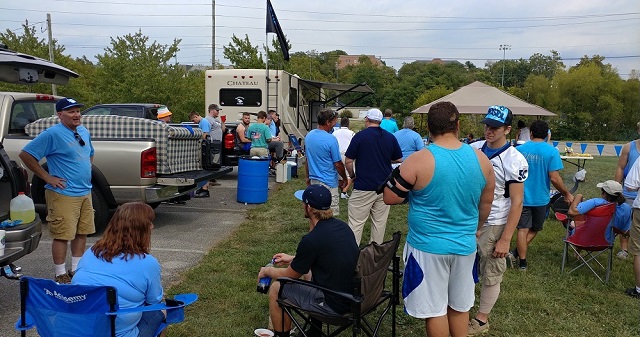 If you attend a home football game at Westminster, you won’t miss them: a lively bunch of parents, younger siblings, and after the game, coaches and players. Grills out, lawn games set up, and even an old plaid couch sitting in the back of a pick-up truck. It’s the W.C. Blue Jay Tailgaters, and they’re eager for you to join them. Below, hear from Steve Roseman, father of Zach Roseman ’19 and founder of the tailgating brigade, on why tailgating with the Westminster family is the best way to spend an afternoon.

On the group’s origins:

The Westminster Blue Jay Tailgaters started with a small group of families in the 2015 season. Since then, it has grown into a spirited group of family, friends and fans of the team, and all-around supporters of Westminster.

I was the one who formally started the organization, but it’s been a group effort. Initially, it was just a few of us gathering before home (and some away) games. Quick bite to eat, a cold drink, and then head to the game. It has grown into an all-day activity that starts early in the morning and continues post-game as players and coaches gather to celebrate success or console each other after a loss.

Our tailgating lot is a cross between family reunion and church picnic. It’s a place filled with camaraderie, affection, shared commitment, and lots of food and drink. If you want to “get it”, come join us. As a Westminster alum, parent or fan, you’ll love it.

We invite any Westminster fan to join us. We’ll feed and water them, and will make them feel like what they are — a valued member of the Westminster community. We particularly invite all parents and families of players to join in.

On how it has grown:

If there’s a spokesperson, I suppose it’s me, only because I don’t mind jumping up into the bed of a pickup truck and yelling to the assembly.

Our Facebook page came into existence this year because I sent an email to everyone asking for a volunteer to do it. Within 2 hours, literally, Dave Payne had a page up with pictures and initial posts. He just stepped up— and by virtue of doing so, is now one of the “leaders” of our merry band of beer guzzlers and wing gobblers.

Last year, we reached out to all the players’ families, especially freshmen, to try to build tailgating into a livelier party. We started bringing all the standard tailgating paraphernalia — tables, grills, coolers, chairs.

We started the season with roughly double the number we had at the end of 2015. Shockleys, Schmidts, Schneiders, Fairchilds, among others. After a game or two, we started inviting players and coaches over for a post-game visit and a free meal. A few showed up — mostly just our kids. But every week, we added parents and fans to an already-super-fun party.

We “group source” planning and leadership. Things are intentionally loosely-regulated (and as soon as they’re not, it’ll be ruined). If someone has an idea, they go with it, and we all have fun pitching in. Someone said, “Let’s have a wing contest.” Now, we have an informally-judged competition, plenty of trash talking, and a trophy. I don’t remember who suggested it, and I have no idea how the judging happens. It just sort of comes together. Same with our upcoming chili cookoff (I’m going to get a whoopee cushion for the winner).

On team spirit and camaraderie:

A happy addition to this year’s festivities has been the enthusiastic participation of players and coaches in the post-game party. We have always invited them, but this year it has really caught on. Every player and every coach receives a hero’s welcome, with the instruction, “If you see a cooler, drink what’s in it. If you see a table, eat what’s on it. It’s all here for you.” If you want to see a group of perfect gentlemen, come watch your Blue Jay football players interacting with their fans. It’s inspiring.

On why Westminster athletes are unique:

Here’s the real story: there is something special about athletics, and particularly NCAA Division III athletics. There is beauty and purity to it. Blue Jays are true scholar-athletes. None of them receive a single dollar of an athletic scholarship. They are inspired by something much truer and more important than money. They participate for the best possible reasons — they love the game; they love the fellowship; they love the challenge, they love the competition; and they love each other. That’s what I love most about Blue Jay football. The purity of everything about it. It is football completely uncorrupted. It’s played and coached by people who are playing and coaching for all the right reasons.

On where the group is headed:

Where do we see this going in the future? Maybe some additional and more formal support of the school — financial and otherwise. We all know that pitching in is part of what you sign up for at Westminster, and we’ll do that. But, where we really see it going is back to the tailgating lot on fall mornings with friends who love football and love our sons; through the hole in the fence to the field right before kickoff; back to the lot after the game to fire up the grills and eagerly wait for our sons and their coaches to arrive.

Next home game, we will probably have 50+ people pre-game, and 100+ post-game when the team joins us. We’ll have the head coach; the offensive and defensive coordinators; at least half of the team, including all the captains; and probably a few of the Westminster faculty.

And we’re still getting started.

To join the W.C. Blue Jay Tailgaters or be added to their email list, visit their Facebook page.