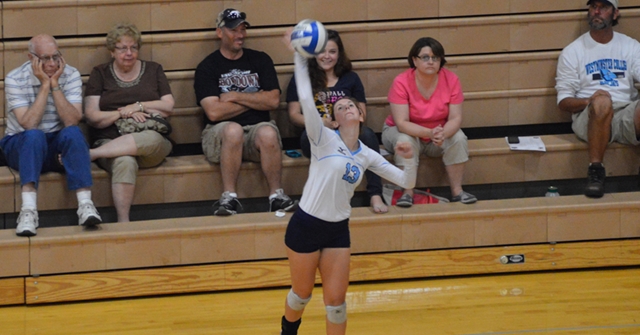 The Blue Jays quickly pulled a 2-0 lead in set one with kills by sophomores Amanda Kiso and Gabby LaRose. A kill by sophomore Riley Lawrence followed by two Spalding attack errors gave the Blue Jays a 5-1 lead, but Spalding went on a four point run to tie the set, 5-5. Two kills by freshman Hannah Marshall started a four point run, and the Blue Jays held the lead throughout the set. A kill by Lawrence put the Blue Jays up 21-16, but Spalding had a five point rally to bring the game within one, 21-20. A Blue Jay attack error tied the set at 24-24, but a kill by Kiso brought the set to game point, and junior Lexi Collier put down a kill to win the set, 26-24.

Spalding jumped out to a 5-0 lead in set two before Westminster called a timeout. The Spalding Golden Eagles scored one more before serving into the net to give the Blue Jays their first point. The Blue Jays rallied back to tie the set, 7-7. Spalding reached a four point run to take the 19-15 lead before Westminster called their second timeout of the set. Marshall smashed a kill to get the point, but a Spalding block on the next play put the score at 20-16, Spalding. Two kills by Spalding gave them the 25-17 set two win to tie the match at 1-1.

The Blue Jays and Golden Eagles battled back-and-forth in set four, but Spalding took off with a four point streak to bring the set to 15-11 before Westminster called a timeout. Spalding served into the net, and sophomore setter Kayla Reeg tipped the ball over for a kill to bring the set to 16-13. Two attack errors by the Blue Jays forced them to take their second timeout of the set, and Spalding finished with a six point run coming out of the timeout to win the set and match, 25-13.