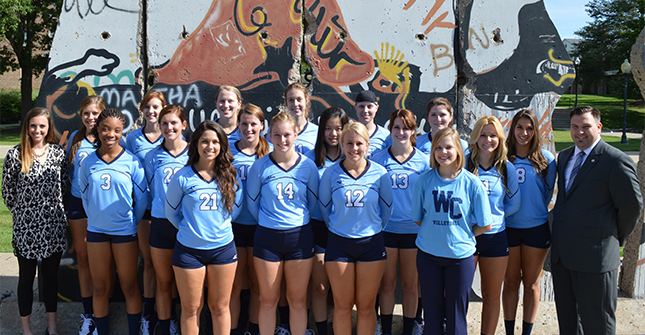 The 2014 SLIAC Volleyball Tournament field is set and it should be an exciting tournament this weekend as Greenville College, Spalding University, Webster University, and Westminster College will battle it out for a berth into the NCAA Division III Tournament.

Tournament Information
The 2014 SLIAC Volleyball Tournament will be held at Greenville College in Greenville, Illinois on Saturday, November 8. The semifinals are set to start at 2 p.m. and 4 p.m. with the Championship match at 7 p.m. Greenville College earned the top seed in the tournament by winning their fifth consecutive SLIAC regular season title and will face number four seed Spalding University in the first semifinals match. Webster University will be the number two seed and face number three seed Westminster College in the day’s second semifinals match. The winners of the semifinals matches will square off for the automatic bid into the NCAA Division III National Tournament.

#1 Greenville College Panthers
The Greenville Panthers have one thing on their mind this Saturday, defending their home court. The Panthers went 9-2 at home this season and will be looking to avenge a first-round loss as the top seed in last year’s SLIAC Tournament. Greenville put together their fifth straight season with at least 20 wins, going 22-8 overall and winning their fifth straight SLIAC regular season title with a 16-2 record. The Panthers are hitting .224 as a team, averaging 12.14 kills per set while defensively they average 16.76 digs per set. The Panthers feature one of the more balanced attacks in the league with three players averaging 2.5 kills per set. Nicole Schaeffer led the team with 3.08 kills per set this season while Allyson Mitchell was impressive in her freshman season, hitting .251 and averaging 3.07 kills per set. Savannah Sells completes the attacking trio, hitting .311 with 2.49 kills per set. Ellen Lueking runs the offense, averaging 9.02 assists while Jamie Schollenbruch provides the defensive leadership averaging a conference high 5.96 digs per set.
#2 Webster University Gorloks
Webster finished the regular season with a 20-12 overall record and a 15-3 mark in the SLIAC. The Gorloks are the conference’s top hitting team, with a .231 percentage, and also led the conference in total blocks this season with 276. The Gorloks rely on a quartet of players on the offensive side. Jenny Howard leads the team at 2.74 kills per set, hitting .298 this season. Sam Kersting and Rachel Nelson are forces in the middle with Kersting averaging 2.53 kills and 1.06 blocks per set and Nelson averaging 2.44 kills and 1.10 blocks per set. The duo finished one-two in the SLIAC in blocks per set. Kristen McDowell averaged just below 2.0 kills per set while hitting .253 this year. Allie O’Toole averages a team high 5.70 assists per set while Jordan Vehlewald led the team in digs with 5.04 per set.

Westminster was 17-13 overall this season and went 14-4 in conference play. The Blue Jays hit .186 as a team this year and are led by Riley Lawrence. Lawrence leads the team with 3.16 kills per set. Lexi Collier averaged 2.21 kills per set and hit a team high .350 this year while Amanda Kiso averaged 2.07 kills and hit .347 with 90 total blocks. Collier and Kiso were second and third in the SLIAC this year in hitting percentage. The versatile Kayla Reeg runs in the attack, averaging a SLIAC best 9.65 assists with 3.65 digs per set. Caroline Will leads the defense in the back row, averaging 3.60 digs per set.

#4 Spalding University Golden Eagles
Spalding brings the conference’s longest active winning streak into the tournament at seven matches. They were 17-15 overall and 13-5 in the SLIAC this season. Spalding hits .216 as a team, third best in the league, and is powered by Elisa Burkman. Burkman finished the year averaging 3.78 kills per set, hitting .259 and was third in the SLIAC in service aces with 48. Victoria Heitzman averaged 2.44 kills per set while Jessica Diehl hit a conference high .383 and averaged 2.29 kills per set. Katelyn Cosgrove averages 7.67 assists per set while defensively Casey Wilkerson averages 4.19 digs per set.