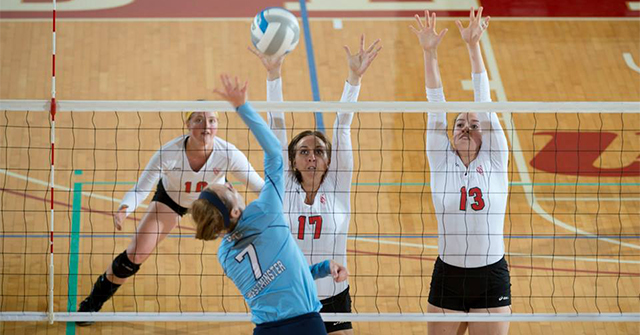 The Westminster volleyball team fell to Webster University, 3-1, in the St. Louis Intercollegiate Athletic Conference (SLIAC) Semifinals round of the Tournament on Saturday, November 8. The loss ended the Westminster Blue Jays’ season with a 17-14 overall record. Sophomore Riley Lawrence was named to the SLIAC All-Tournament Team.

Lawrence led the Blue Jay attack with 19 kills. Junior Lexi Collier and freshman Hannah Marshall each added 12 kills to the mix, and Collier finished the match with a .333 hitting percentage.

Sophomore setter Kayla Reeg set the pace with 50 assists, and junior Caroline Will led the defense with 21 digs.

The Blue Jays finished conference play in third place with a 14-4 record.