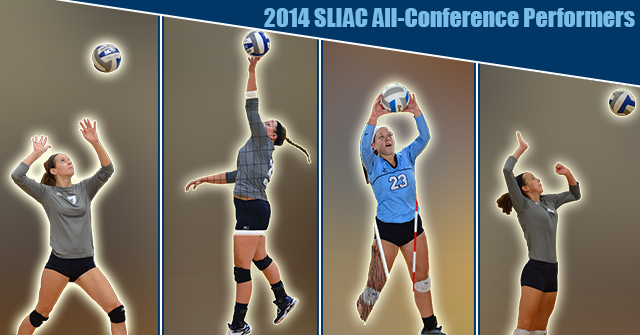 Collier, a middle hitter from Weston, Missouri, ranked second in the SLIAC in hitting percentage with a .349, leading the Blue Jays’ offense. She finished with 235 kills on 490 attempts. She ranked second on the team with 69 total blocks and earned the team 281 points.

Collier earned SLIAC Player of the Week honors for the week of September 15-21.

Lawrence earned Westminster Athlete of the Week honors for the week of September 15-21.

Reeg, a setter from St. Louis, Missouri, led the conference in assists per set with 9.76. She broke the Westminster modern career assist record in the 3-0 loss to Millikin on November 1.  She finishes the season with 1,054 assists, totaling 2,102 assists in her career at Westminster. Reeg also led the team with 390 digs, averaging 3.61 digs per set. She added 29 service aces and 38 kills to the season.

Kiso, a middle from Jefferson City, Missouri, ranked third in the SLIAC in hitting percentage with a .336. She put down 216 kills, and led the Blue Jays with 95 total blocks. She averaged .9 blocks per set and earned the Blue Jays 280 points.

Kiso earned Westminster Athlete of the Week honors for the week of September 1-7.

The Blue Jays finished the season with a 17-14 record and placed third in the SLIAC with a 14-4 record. They ended their season with a 3-1 loss to Webster University in the semifinals round of the SLIAC Tournament.