Volleyball Picks Up 3 Wins At Eureka 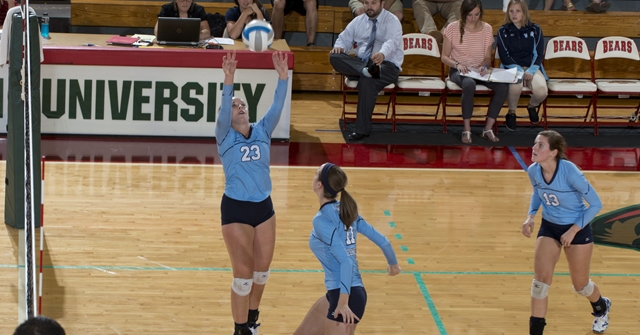 The Westminster women’s volleyball team leaves their two-day trip to Eureka with three more conference wins. The Westminster Blue Jays swept Eureka on Friday night, 3-0. On Saturday morning, the Blue Jays faced Spalding and won 3-1. They went on to play Eureka again, and swept them again, 3-0.

The Blue Jays leave Eureka with a 4-game winning streak, and are now 9-1 in conference play and 11-8 overall.

In the final game of the weekend, the Blue Jays defeated Eureka 25-18, 25-20 and 25-23. Junior Lexi Collier led the attack with 11 kills and a .467 hitting percentage. Reeg had 29 assists. Reeg and freshman Kendall Johnson had 11 digs each, and Johnson had three service aces.

The Blue Jays return to the court on October 11 as they host Blackburn College at 9:30 a.m.