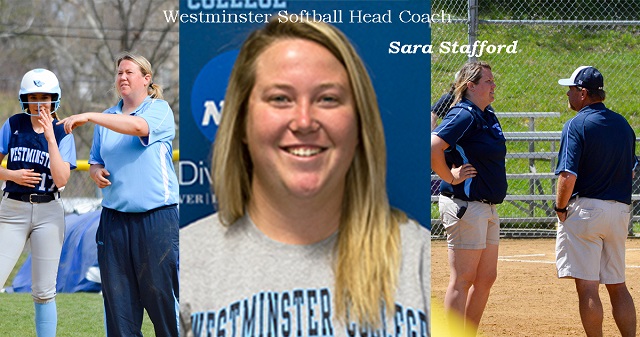 After his four successful seasons as the Westminster Softball Head Coach, Joe Henderson will step aside to a smaller assistant role on the team. His assistant for the last four years, Sara Stafford, is named the Head Coach effective immediately.

“I’m very grateful for the opportunity and for the players I’m jumping in with,” said Stafford. “It’s not every day a coach inherits a back-to-back conference championship team.”

Henderson resigns as the winningest Head Coach in program history with a record of 81-68. Stafford has been his assistant for all 81 of those wins.

Along with being named Coach of the Year in back-to-back seasons, Henderson has helped to produce one SLIAC Player of the Year (Erica Burney, 2017), two Newcomers of the Year (Josie Cotter, 2017; Emily Holloway, 2018), and two Pitchers of the Year (Alyson Hahn, 2017; Katie Price, 2018).

In the last four seasons, a total of six players have been named to the National Fastpitch Coaches Association All-Region teams, including Burney’s All-America selection in 2016.

Henderson’s teams also have been successful in the classroom, with eight players named to the SLIAC Academic All-Conference team.

Stafford has played a crucial role in the recruitment of each incoming class in her four years at Westminster.

Stafford steps into the Head Coach role after serving as the top assistant for Henderson over the last four years. Stafford started her college career at North Central Missouri College before transferring to Quincy University in Quincy, Illinois, to finish her remaining two years. She graduated with a Bachelor’s in Sports Management and a minor in Studio Art.