Collier and McCaul Named SLIAC Players of the Week 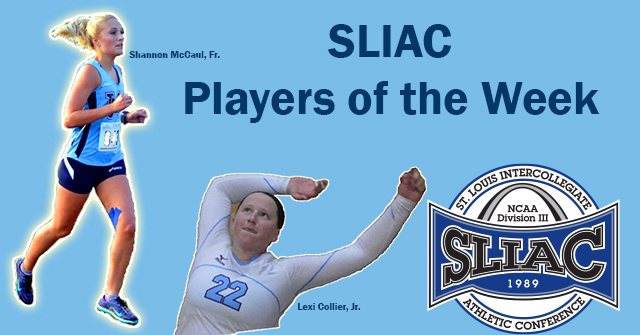 Lexi Collier was named the SLIAC Defensive Volleyball Player of the Week. Collier, a junior from Weston, Mo., helped the Blue Jays remain undefeated in conference play with wins over Iowa Wesleyan and Fontbonne. She averaged 5 blocks per match on the week, including seven block assists in a win over Fontbonne. She finished the week with two solo blocks and eight block assists, averaging 1.25 blocks per set and totaling six points from blocking alone.

Shannon McCaul was named the SLIAC Women’s Cross Country Runner of the Week. McCaul, a freshman from Rolla, Mo., finished the 5k Missouri Southern Stampede with a time of 20:07, a mile pace of 6:28. She helped her team finish 16th overall at the meet while she finished 59th individually.