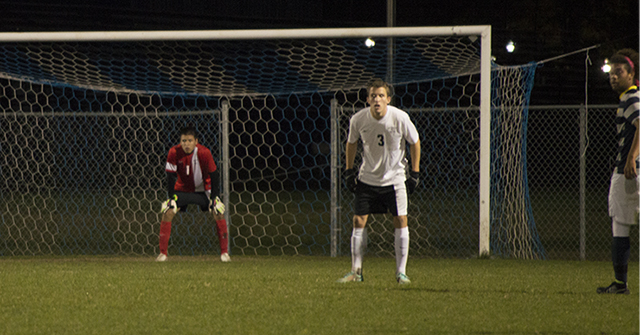 The Westminster men’s soccer team hosted Webster University on Wednesday, October 22, for the St. Louis Intercollegiate Athletic Conference (SLIAC) Game of the Week. Webster scored the lone goal in the 1-0 shutout, bringing the Westminster Blue Jays to 4-1-1 in conference play and 6-7-1 on the season.

Westminster was only able to get off two shots in the first half compared to Webster’s 9 shots, but the game remained scoreless heading into halftime.

Sophomore goalkeeper Raul Belman Romero had his fourth save of the game in the 65th minute, but Webster was able to get the ball past him in the 68th minute to put a point on the board.

Despite pushing the ball up the field and attacking the Webster defense, the Blue Jays were unable to take another shot in the game. The Blue Jay defense held Webster from shooting again, ending the game with a 1-0 loss.

Belman Romero (6-7-1) was credited with the loss. He had four saves and allowed one goal.

The Blue Jays are back in action for their final home game on Saturday, October 25 for the Homecoming and Senior Day game. The five seniors will be honored at 7:00 p.m. with the first touch following the ceremony.

Westminster’s Student-Athlete Advisory Committee (SAAC) will be hosting a “Senior Day Fiesta” at the start of the women’s soccer game. They will be serving Jalisco’s Mexican at 5:00 p.m. down at the soccer fields, and the only cost is 2 canned food goods or $1.00. The canned goods and money will go towards their fall canned food drive.