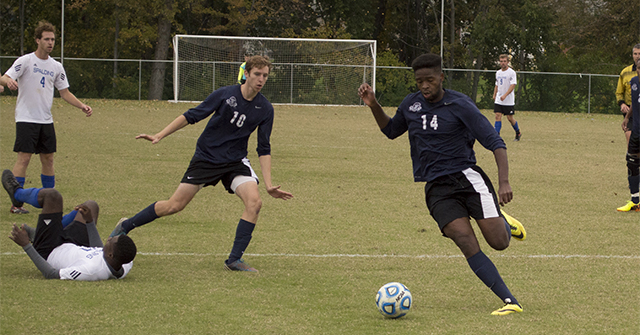 The Westminster men’s soccer team is set to host the St. Louis Intercollegiate Athletic Conference (SLIAC) Championship game after a 4-0 sweep over Spalding University in the SLIAC semifinals round on Thursday. The Blue Jays’ fifth consecutive shutout improves their record to 10-7-1.

Just under four minutes into the game, freshman Tanner Touslee crossed the ball to the right side of the box, and junior Kevin Knobbe knocked the ball in to give the Blue Jays a 1-0 lead.

In the 21st minute, senior Jacob Appelbaum put a long pass in front of freshman Daniel Barone who placed the ball past the goalkeeper.

The Blue Jays were unable to get another shot off before the time ran out. Sophomore goalkeeper Raul Belman Romero stopped Spalding’s two shots on goal, leaving the game at 2-0 heading into halftime.

The Blue Jays took two shots on goal before junior Kyle Collins took a shot that slid past the goalkeeper in the 79th minute.

In the 89th minute, senior Muzi Shongwe put the final touch on the game with a goal off the assist from freshman Austin Chandler.

Shongwe got off one more shot that went high before time ran out, ending the semifinal game with a 4-0 sweep.

With the 4-0 shutout, keeper Belman Romero records his 6th shutout of the season. He had two saves.

The Blue Jays will host the #4 seeded Fontbonne University in the SLIAC Championship game on Saturday, November 8, at 1:00 p.m. The Blue Jays and the Fontbonne Griffins will be playing for the SLIAC Tournament title and the automatic bid to the NCAA DIII Tournament.