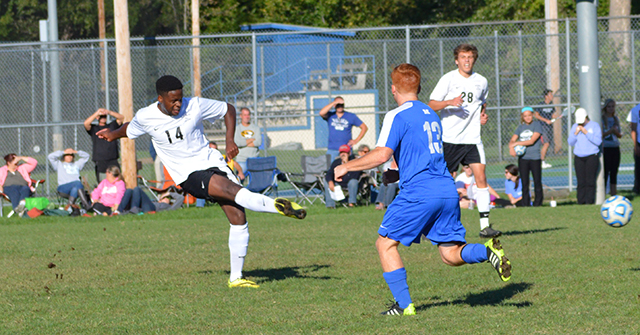 The Westminster men’s soccer team could not stop Spalding University from scoring the tying goal in the 88th minute of the game on Saturday afternoon. The Westminster Blue Jays and the Spalding Golden Eagles ended in a 2-2 draw after two scoreless overtimes. The tie is the first for the Blue Jays this season, putting them at 4-0-1 in conference and 6-6-1 on the season.

Sophomore Tripp Sheehan scored the first goal of the game off an assist from sophomore Drew Cook in the 31st minute.

Spalding came out in the second half and tied the game up with an unassisted goal in the 50th minute, but the Blue Jays took the lead back just a minute later with a goal by junior Kevin Knobbe with the assist from Sheehan.

With 2:04 left in regulation, Spalding scored a goal to tie the game at 2-2. The Blue Jays were unable to get another shot off, ending regulation 2-2 and sending the game into overtime.

The Blue Jays were able to get just one shot off that went wide in the first overtime. Sophomore goalkeeper Raul Belman Romero saved the lone shot by Spalding, sending the game into the second overtime.

With 2:25 left in the second overtime, freshman Daniel Barone took a shot, but the Golden Eagle’s goalkeeper saved it. Spalding took just one shot in the 109th minute, but the shot went wide.

The Blue Jays took 14 shots and nine were on goal. Keeper Belman Romero (6-6-1) faced 7 shots on goal and saved five in the 110 minutes of play.