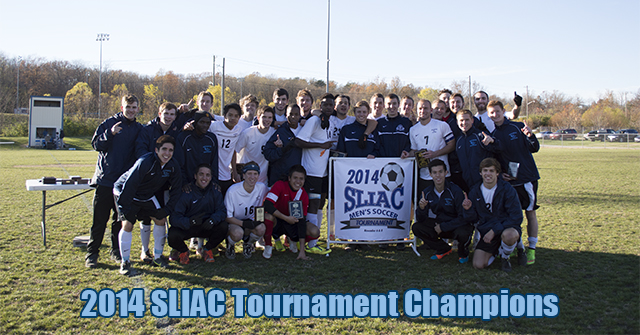 The Westminster men’s soccer team won the St. Louis Intercollegiate Athletic Conference Tournament with a 3-1 victory over Fontbonne University in the championship game. The win earns them back-to-back conference tournament titles and their second consecutive appearance in the NCAA Tournament.

The Westminster Blue Jays will find out where they will begin the 2014 NCAA Tournament on Monday, November 10, at 12:30 p.m. with the NCAA Selection Show.

The Blue Jays were first on the board in the championship game with a goal by freshman Tanner Touslee off the assists from sophomore Drew Cook and junior Kyle Collins in the 29th minute.

The Blue Jays took three more shots throughout the first half, but were unsuccessful in getting the ball past Fontbonne’s goalkeeper. Sophomore goalkeeper Raul Belman Romero stopped both Fontbonne’s shots on goal, sending the game into halftime with a lead of 1-0.

The Blue Jays fired five shots off before Collins was able to find the back of the net in the 65th minute. They possessed the 2-0 lead with 25:24 remaining in the game. Freshman Daniel Barone took a shot on goal in the 68th minute, but the Fontbonne keeper was able to knock the ball out. Cook recovered the ball and  placed it past the goalkeeper to take the 3-0 advantage over Fontbonne.

Fontbonne took three shots and finally put the ball past Belman Romero in the 83rd minute to put themselves on the board, 3-1.

Fontbonne fought to fire off four shots in the remaining seven minutes, but were unsuccessful in finding the net, ending the game with a 3-1 win for Westminster.