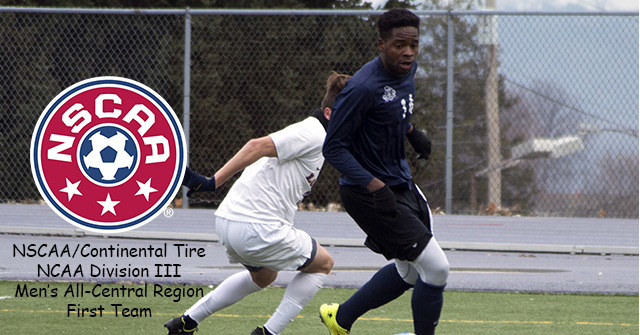 Dlamini is the third Blue Jay in program history to be named to the First Team NSCAA All-Region and the fourteenth Blue Jay to earn NSCAA All-Region honors. He earns this honor after anchoring the Blue Jay defense all season. He started in 17 games and appeared in 19. He was a major part in limiting the Blue Jay opponents to just 20 goals and 75 shots on goal throughout the season. In conference play, Dlamini helped the Blue Jays to a second place ranking in the St. Louis Intercollegiate Athletic Conference (SLIAC) with a 1.06 goals allowed average and a third place ranking in conference with 22 goals allowed.

Dlamini earned First Team All-SLIAC honors at the end of the 2014 season.

“I can’t say enough about Muhle,” Head Coach Andrew Bordelon commented. “His story is truly incredible. For someone who started playing at such a late age and dealing with so many injuries, to show the dedication and work ethic is really remarkable.”

When asked about how Dlamini helped bring the team back to the NCAA Tournament, CoachBordelon stated, “He was a rock in the back for us all year despite never playing the center back position before. His leadership abilities and personality got us through a couple hard times this season and he made every player on the team better on and off the field.”

The Blue Jays finished the 2014 season with an 11-8-1 overall record. They won their second consecutive conference tournament, earning the program’s third automatic bid to the NCAATournament. The season ended with a 2-0 loss to Loras College in the first round of the NCAATournament. The Blue Jays went 7-1-1 in conference with a second place finish.

The National Soccer Coaches Association of America (NSCAA) is the world’s largest soccer coaches’ organization and serves members at every level of the game. The NSCAA/Continental Tire All-Region teams are voted on by members of the organization. For a full list of student-athletes honored by the NSCAA on the All-Region teams click HERE.