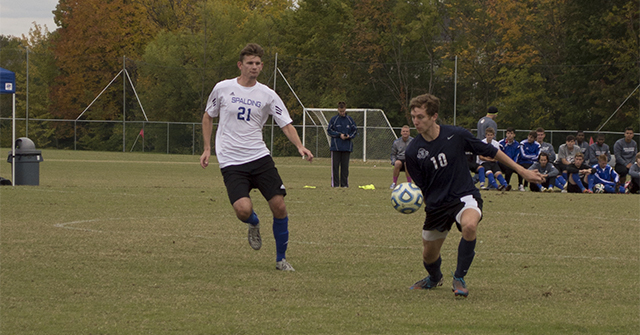 Freshman Daniel Barone scored off his corner kick in just over a minute into the game. Junior Kevin Knobbe then scored in the 16th minute off an assist by freshman Dustin Seibolt to give the Blue Jays a 2-0 lead.

The Blue Jays took two more shots on goal, but the MacMurray goalkeeper was able to stop them. MacMurray took a shot on goal in the 41st minute, but sophomore goalkeeper Raul Belman Romero grabbed the ball to keep them from scoring.

In the 52nd minute, sophomore Tripp Sheehan beat his defender and crossed the ball to Barone in the middle. Barone shot and scored his second goal of the game, giving the Blue Jays a 3-0 lead.

Barone went for the hat trick less than a minute later, but MacMurray’s goalie was there to stop it.

The Blue Jays took three more shots on goal until MacMurray fouled them in the box in the 72nd minute. Sophomore Peter Gerber took the penalty kick for the Blue Jays and scored, giving them a 4-0 advantage.

Sophomore Keagan Cavanah scored the fifth and final goal of the game off a cross from freshman Austin Chandler in the 84th minute.

The Blue Jays took 11 shots on goal and scored 5. Goalkeeper Belman Romero was credited with the shutout.

The Blue Jays will host Spalding University in the semifinal round of the SLIAC Tournament on Thursday, November 6. Details about the game will be announced soon.