Men’s Soccer vs. Webster Named SLIAC Game of the Week 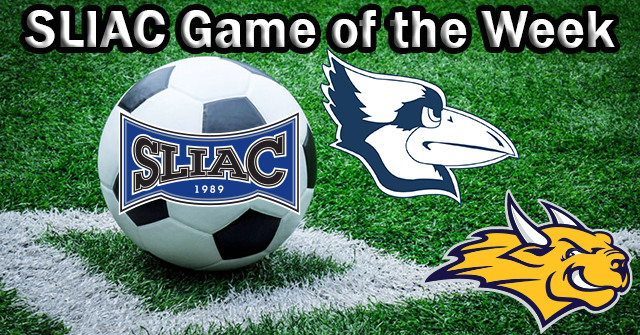 This week’s St. Louis Intercollegiate Athletic Conference Game of the Week is a men’s soccer game between Webster University and Westminster College. The SLIAC Game of the Week highlights one key conference match-up each week.

At A Glance
This week’s men’s soccer game between Webster University and Westminster College is the featured SLIAC Game of the Week. With just two weeks remaining in the regular season this week’s game starts the battle for seeding in the SLIAC Tournament. Webster and Westminster are currently tied for second place in the standings with a 4-0-1 conference record. The last time the two teams met was in the 2013 SLIAC Championship game.

Webster ranks 4th in the SLIAC in scoring with 44 goals while allowing 27 goals this season. Senior Mike Wells leads the team in scoring with 18 points, recording five goals and eight assists. Freshman Dzani Delic leads the team with six goals while a total of 20 players have scored at least one goal this season for Webster. The Webster defense has not allowed a goal in 261 minutes, recording back to back shutouts and three shutouts in their last four games. Senior Goalkeeper Ian McReynolds holds a 1.76 goals-against average, recording 22 saves in over 819 minutes.

About Westminster
Westminster begins the week with a 6-6-1 overall record and are tied for second in the SLIAC with a 4-0-1 conference record. After a three game losing streak the Blue Jays have found their stride recently, winning four straight games and then recording a tie against Spalding in their last outing.

Westminster ranks 5th in the league in scoring with 43 goals but have allowed the third fewest goals with just 18 this year. The Blue Jays offense is led by sophomore Tripp Sheehan with 20 points. Sheehan is tied for the team lead with six goals and tops the team with eight assists. Freshman Dustin Seibolt is tied with Sheehan for the team lead in goals with six. Sophomore Raul Belman Romero is the stalwart in net for Westminster recording 39 saves in over 1100 minutes and holding a 1.45 goals-against average.