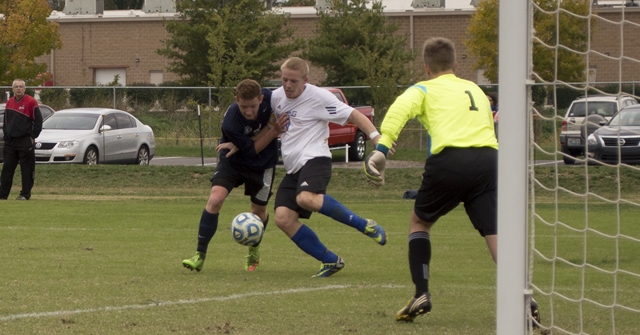 The Westminster men’s soccer team shut out Fontbonne University on Tuesday evening, 2-0. The shutout brings the Westminster Blue Jay’s record to 6-1-1 in conference and 8-7-1 overall.

On the second shot of the game, freshman Dustin Seibolt headed the ball in for a goal off sophomore Tripp Sheehan’s cross. The goal gave the Westminster Blue Jays a 1-0 lead in the 18th minute. Westminster and Fontbonne each took two more shots throughout the first half, but neither team could find the net.

Just three minutes into the second half, Seibolt connected with the goal again off Sheehan’s pass to give the Blue Jays a 2-0 lead.

Westminster took two more shots on goal, but were unable to get the ball past Fontbonne’s goalkeeper.

The Blue Jays close out conference play on Saturday, November 1, at MacMurray College. The game starts at 3:00 p.m.