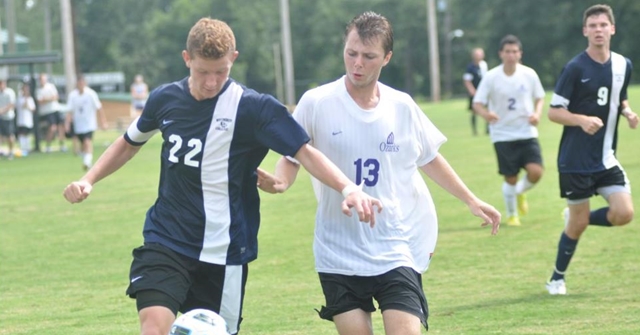 Freshman Dustin Seibolt tied the game-day record with 4 goals in the 16-0 shutout over Eureka College on Saturday evening. The win keeps the Westminster Blue Jays undefeated in conference play with a 3-0 record, and brings them to 5-6 on the season.

Seibolt scored the first two goals of the game in the first three minutes with assists by freshman Tanner Touslee and freshman Mauricio Mateo.

Sophomore Tripp Sheehan scored in the 19th minute with the assist from freshman Austin Chandler, and junior Sam Lopez scored in the 38th minute from Sheehan’s corner.

Seibolt closed out the first half with two more goals with assists from Chandler and Lopez, tying the Westminster game-day goal record.

The Blue Jays scored 10 goals in the second half with goals from seven different players.

Junior Kevin Knobbe scored the first goal of the second half off an assist from sophomore Josh Jaycox. Jaycox scored just over a minute later off Sheehan’s throw-in.

Lopez scored his second goal of the game, followed by sophomore Peter Gerber’s goal with the assist from sophomore Diego Veintimilla. Sophomore Chris McCoy scored the following two goals in the 62nd and 67th minutes, with an assist from junior Kyle Collins on the first one.

Gerber scored again in the 70th minute, followed by two goals by senior Muhle Dlamini off assists from Collins and senior Jacob Appelbaum.

Sophomore David Immanuel scored the final goal of the game in the 83rd minute off an assist from Appelbaum.

Sophomore Raul Belman Romero was in goal the first half and was credited for the win. Freshman Ben Chesher took over in goal for the second half, but faced no shots.