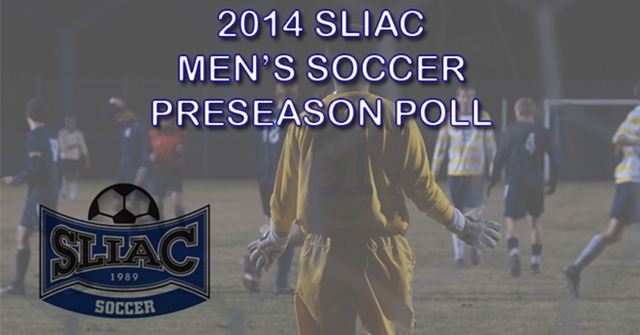 The 2014 St. Louis Intercollegiate Athletic Conference (SLIAC) Men’s Soccer Preseason Coaches’ Poll has selected Westminster as the favorite for the 2014 season. The Blue Jays received 78 points including 7 of the 10 first place votes.

Westminster finished last year with an unprecedented run into the Third Round of the NCAA Tournament. The Blue Jays won 10 of their last 12 games and finished with a 13-9-1 overall record while capturing the program’s first ever SLIAC Tournament title. The Blue Jays went 8-1 in conference play last year under first-year head coach Andrew Bordelon. He brings back seven starters and 23 players from last year’s squad including a pair of First Team All-Conference performers in Daryl Doran and Drew Cook. Cook, a sophomore forward, led the team in scoring with 20 points last year on eight goals and four assists. Doran, a junior defender, will anchor the defense which provides support for netminder Raul Belman Romero. Belman Romero, a sophomore, finished first in goals against average and save percentage during conference action last year.

The Blue Jays open the season in Canton, Missouri on Friday, August 29 as they face Culver-Stockton at 3:00 p.m. Conference play begins on Saturday, September 27 with a home match-up with Blackburn College beginning at 7:00 p.m.