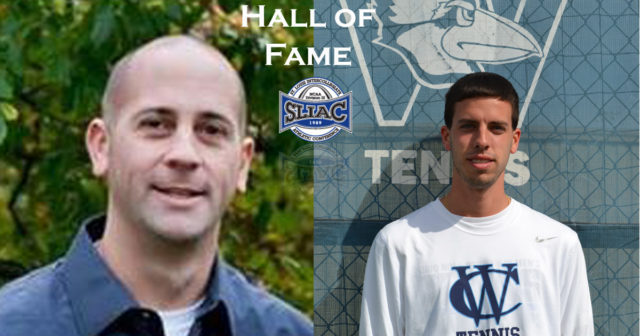 Paul Moyer ’01 KA and Tony Stephenson ’13 were two of five members selected for the 2018 class of the St. Louis Intercollegiate Athletic Conference Hall of Fame.

Moyer was a pitcher for Westminster’s baseball team from 1998-2001, becoming one of the most decorated players in the program’s history. His accolades include being the only player in Westminster baseball history to receive two back-to-back Player of the Year awards, which he earned in his junior and senior seasons. During those two seasons, Moyer was also named to the American Baseball Coaches Association All-Central Region team. He was named to the Second Team as a junior and First Team as a senior. During the 2000 and 2001 seasons, Moyer’s pitching led the Blue Jays to back-to-back conference championships and trips to the NCAA Tournament.

Moyer remains at the top of the Westminster record books in two pitching categories, including tied for second in complete games (7) and second in saves (13).

Moyer is just the third baseball player to be inducted into the SLIAC Hall of Fame and the first from Westminster.

Stephenson was a men’s tennis player at Westminster from 2009-13 and was a dominant force for all his four years. He was a four-time All-Conference award winner in all four of his seasons in both singles and doubles play, including First Team honors in his freshman and sophomore seasons.

In his first two years, Stephenson played at the No. 1 spot and helped his team to first-place finishes in the conference and NCAA Tournaments bigs in 2010 and 2011. The team finished second in 2012, but returned to its winning ways in 2013 but posting another first-place finish.

Inductees will be honored during the annual St. Louis Intercollegiate Athletic Conference Awards Banquet on May 15, 2018.