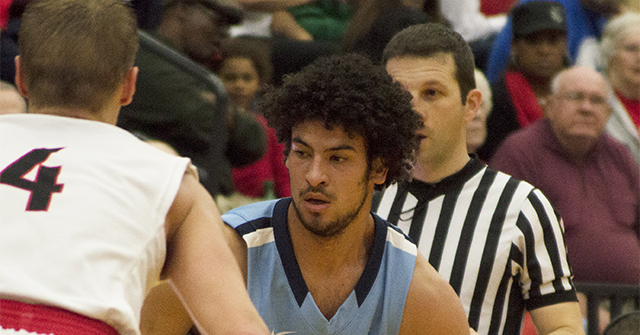 The Westminster men’s basketball team fell to Simpson College on Wednesday evening, 70-52. The loss brings the Westminster Blue Jays to 2-7 on the season, while the Simpson Storm improve to  5-5.

The Blue Jays started the game strong in the paint, scoring on three layups. The Blue Jays quickly faced foul trouble however, and the Storm took advantage. They went 6-6 from the foul line to take the 10-6 lead seven minutes in.

Senior Brandon Moore scored the following five points with a jump shot and a three-pointer, but the Storm scored 11 in the same amount of time. Freshman Tanner Cochran followed his shot and put the ball back in to bring the game within six, 26-20, with four minutes remaining in the half. The Blue Jays and the Storm headed into halftime with a score of 34-26, Simpson.

The Blue Jays then hit a 14-0 run to bring the game within 13 with points coming from junior Mik Ebert, freshman Jimmy Villalobos and sophomore Javier Martin Ortega. Junior Tanner Gentges brought the game within 12 with his good layup and the and one shot.

Junior Matt Murphy put in two from the foul line to put the game at 63-52, but the Blue Jays were unable to score in the final two minutes of the game. The Storm put up seven, bringing the Blue Jay’s loss to 70-52.

Moore led the Blue Jays on offense and defense, putting up 10 points and pulling down five boards. Cochran and Ebert each had four rebounds.

The Blue Jays travel to St. Louis, MO on Saturday to face DII Maryville University. The game starts at 3:00 pm and can be viewed here. Live stats are also available here.