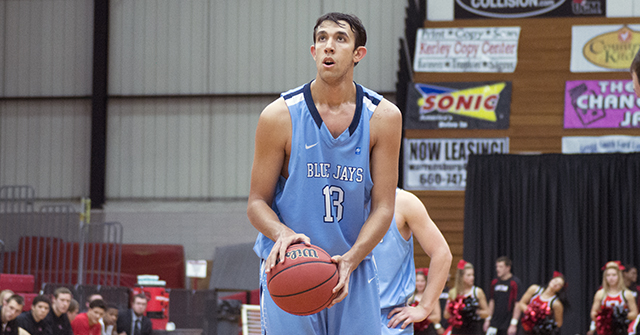 The Westminster men’s basketball team fell to Principia College on Tuesday night, 75-57. The Westminster Blue Jays are now 2-10 on the season and 1-4 in conference.

The first two minutes of the game were scoreless until junior Tanner Gentges was fouled on the fast break. He went 1-2 from the line, putting the first point on the board. Junior Matt Murphy hit two from the foul line before Principia struck an 11-0 run.

Gentges knocked down a three-pointer coming out of a timeout, and freshman Tanner Cochran went 2-2 from the line after being fouled on a fast break. Senior Brandon Moore then sank a three-pointer to bring the game within 10 with 4:30 remaining.

Principia extended their lead, heading into halftime with a 40-24 advantage over the Blue Jays.

Principia scored the first seven points in the second half before the Blue Jays called a timeout. Cochran came out of the timeout and drained three consecutive jump shots. Gentges knocked down a shot to score the eighth unanswered point, cutting the deficit to 47-32.

The Blue Jays were unable to bring the game back within reach, and Principia defeated them 75-57.

Moore led the Blue Jays with 16 points, followed by Cochran with 14. Gentges, Saldana and Ebert each pulled down four boards.