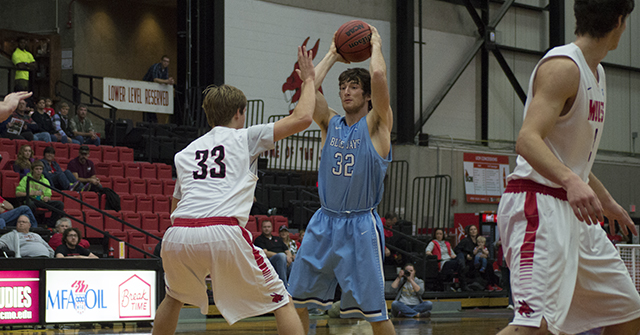 The Blue Jays kept with the Maryville Saints throughout the first half, but were unable to grab the lead. A layup by junior Tanner Gentges tied the game at 16-16 with 8:55 remaining in the half, but the Saints pulled away. Heading into halftime, the Blue Jays trailed by three, 33-30.

To start the second half, freshman Tanner Cochran knocked down both from the foul line. Senior Brandon Moore then laid in a shot to take the Blue Jay’s first lead of the game just 1:24 into the second half, 34-33. Maryville followed with a 9-0  hot streak. They increased their lead to 13 points with 14:41 left in the game, 49-36.

Moore led the Blue Jays offensively with 12 points and defensively with four rebounds. Cochran added eight points to the loss and Gentges dished in four assists.

The Blue Jays are off for the holidays, and will return to the court again on Saturday, January 3, at MacMurray College with a 3:00 pm game time.