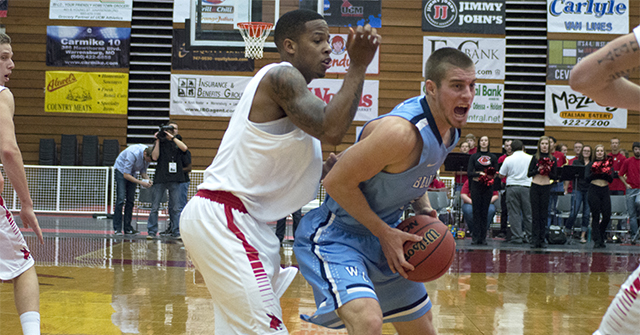 The Westminster men’s basketball team steam rolled the Central Christian College of the Bible Saints on Monday evening, 74-38. The win is the first of the season, bringing the Westminster Blue Jay’s record to 1-3 overall.

The Blue Jays held the Saints to just 7 points for the first 12 minutes of the game while they went on their second double digit run. The 13-0 run over a six minute span gave the Blue Jay’s a 25 point lead, 32-7, with 8:14 to go in the first half.

Junior Aaron Jackson Jr. grabbed a steal and headed for the fast break with 2:44 on the clock, but was fouled on the way up. He sank the first shot from the foul line, taking a 29 point lead, the largest of the first half. Jackson Jr. then dropped in a three and junior Jay Zalis hit a jump shot off an assist by junior Jayson Saldana to bring the score to 44-16 with a minute to go. The Saints went 1-2 from the foul line in the final minute of the game to send the game into halftime with the Blue Jays leading 44-17.

Junior Kellen Brondel started the second half with a fast break dunk off his steal. The Blue Jays pushed their lead to 34 points in the first 6:40 of the second half, but the Saints rolled out a 12-2 run to cut the lead to 24 points with just under 8 minutes left of play, 57-33.

A short jumper in the paint by junior Mik Ebert stopped the Saint’s run. Freshman Jordan Jones laid up a shot, Ebert knocked down a three off a fast break and freshman Jimmy Villalobos dropped in a three-pointer to give the Blue Jays a 30+ point lead back.  Villalobos hit the final shot of the game with a three-pointer to give the Blue Jays the 74-38 win.

Moore went a perfect 4-4 from the three-point line, leading the Blue Jays with 12 points.  Villalobos added 11 points and four rebounds to the win. Gentges, junior Matt Murphy and Ebert each had five rebounds, and Gentges dished in four assists.

The Blue Jays will return to the court on Wednesday, December 3, with their first conference match-up of the season. They will host Webster University at 8:00 p.m. in the Historic Gymnasium.