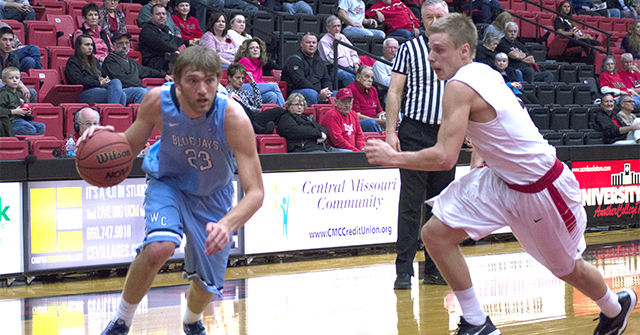 The Westminster men’s basketball team defeated Blackburn College on Saturday afternoon, 72-64. This win gives the Blue Jays a 2-6 overall record and a 1-2 record in conference play.

Westminster and Blackburn battled for the first six minutes of the game until senior Brandon Moore drilled a three-pointer at 13:50 sophomore Tanner Gentges laid in a shot at 13:04 to give the Blue Jays a five point lead, 11-6. At 8:48 left in the half, junior Brandon Drum hit a three pointer to start a 7-0 run. After battling to keep their lead, Westminster’s junior Jay Zalis hit a three-pointer to bring the Blue Jays ahead by 10 with 4:14 remaining in the half. Blackburn battled back, but could not get within 10 points. Westminster went into halftime up by 11, 38-27.

At the start of the second half, Blackburn fought to get within six points. Westminster’s Moore answered back with a three-pointer from Drum at 16:11 to put the lead back up to nine. Blackburn hit a couple jumpers and a three to bring the lead down to six points. Moore and Gentges each sink two free throws, giving the Blue Jays a 13-point lead.

With 9:44 remaining Blackburn grabbed a 5-0 run to put them within five points, but junior Mik Ebert answered with a three-pointer at 8:23 to end the run and put Westminster back ahead by nine points. Westminster kept the lead by at least nine points.  With 1:17 remaining in the game, junior Matt Murphy make a jumper to put the Blue Jays ahead by 10. The Blue Jays ended the game with an eight point advantage, 72-64.

The Blue Jays next contest is Wednesday, December 17 at Simpson College.