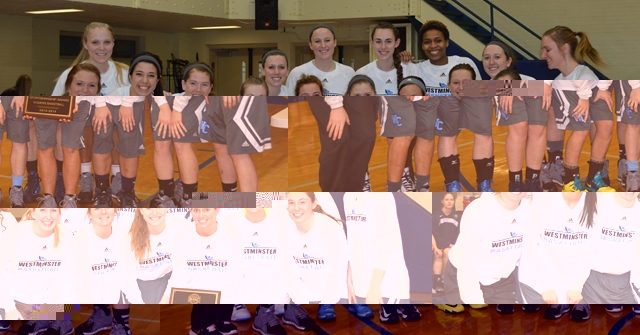 “I am proud of this team,” stated Head Coach Tracey Braden. “They displayed tremendous heart and great character tonight. It didn’t end how we wanted or expected it to, but we respect Coach Just and his team, and we wish them the very best!”

A layup by sophomore Mackenzie Haddox put the Blue Jays within five, and another three-pointer by Theroff had the Blue Jays within three with 47 seconds remaining. The Golden Eagles hit a layup and went 2-4 from the foul line to put them up by seven with 17 seconds on the clock. Haddox hit a three with four seconds remaining to bring them within four points, 68-64. The Blue Jays quickly fouled, but Spalding sank both free throws. The Blue Jays pushed it down the court, but were unable to find the net, bringing their season to an end with the 70-64 loss.

Prior to the second SLIAC semifinal game, the conference announced the 2013-14 award winners.

Each SLIAC school selects a member of the basketball team that has continually demonstrated good sportsmanship throughout the season. Junior Danielle Smulczenski was selected to the SLIAC All-Sportsmanship Team for Westminster College.

Westminster was also awarded the SLIAC Sportsmanship Award for the third consecutive year.