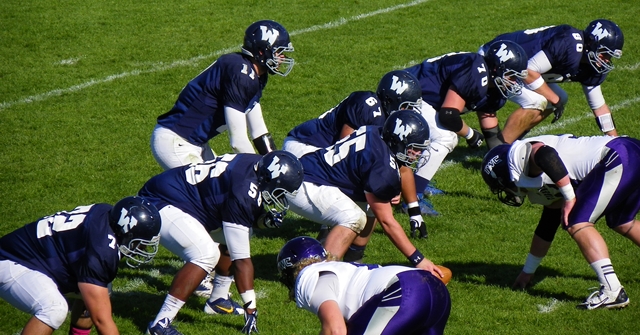 The Westminster football squad is selected to finish seventh in the Upper Midwest Athletic Conference (UMAC) Football Coaches’ Poll for the 2014 season. The Blue Jays collected 32 points in the annual coaches’ preseason poll.

With 15 starters returning, the Blue Jays look to build upon experience for the 2014 season while adding players into key positions.

Offensively, the Blue Jays return the strong duo of senior quarterback Joe Plassmeyer and sophomore wide receiver Mike Washington. Plassmeyer threw 1,853 yards and 15 touchdowns throughout the season last year, and Washington led the team with 692 receiving yards. The Blue Jays lost their top three running backs, including Second Team All-Conference Ronnie Seals Jr., but they will look to have a balanced attack this year after adding depth to the running game.

The Blue Jays open the season with a home match-up with Hendrix College on Saturday, September 6 at 1:00 p.m.