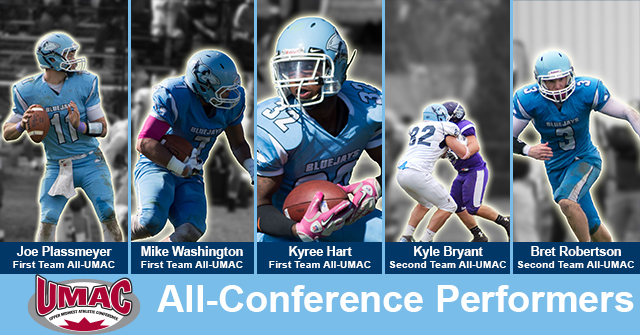 The Upper Midwest Athletic Conference (UMAC) announced the 2014 All-Conference Football Teams on Wednesday, November 19, and the Westminster Blue Jays had five players earn All-Conference honors and one earn a spot on the All-Sportsmanship Team.

Plassmeyer, the Blue Jay’s starting quarterback from St. Louis, Missouri, earned the quarterback First Team All-UMAC honors. He led the UMAC in passing yards per game throughout the season and ended with an average of 264.3 yards per game.  He completed 236 passes with a 55.7 passing percentage. Plassmeyer threw 2643 yards and 23 touchdowns on the season, tying for second in the UMAC for touchdowns.

Washington, a wide receiver from Holts Summit, Missouri, earned First Team All-UMAC honors at the wide receivers position. He finished with 60 receptions and 685 yards, averaging 11.4 yards per catch. Washington ended the season ranked second in the UMAC for receiving yards per game with 68.5. He caught six touchdown receptions. He caught his career long catch, an 83-yard touchdown reception, versus St. Scholastica.

Hart, a sophomore cornerback from Mesa, Arizona, earned a spot on the defensive backs First Team All-UMAC. He completed 31.5 tackles on the season, including 4.5 tackles for a loss of 15 yards. He had two sacks for nine yards and 13 pass breakups. Hart tallied four interceptions and four forced fumbles. His two fumble recoveries were returned for a total of 67 yards and two touchdowns. Hart also spent time on special teams, returning four kickoffs for a total of 81 yards.

Bryant, a senior defensive lineman from St. Louis, Missouri, earned Second Team All-UMAC honors as a defensive lineman. He had 29 tackles on the season, including 5.5 tackles for a loss of 18 yards.  He had two sacks, three pass breakups and one forced fumble.

Robertson, a junior free safety from California, Missouri, was placed on the defensive back’s Second Team All-UMAC. He totaled 66 tackles throughout the season, including a Westminster game-day record 22 tackles in the opening game versus Hendrix. He returned his two interceptions a total of 58 yards, and he forced three fumbles and recovered two of them.

The Blue Jays finished their season with a 6-4 overall record. They tied for fourth in the UMAC with a 6-3 record.