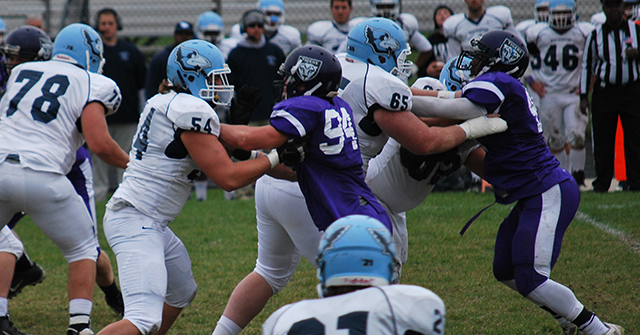 The Westminster football team scored 21 unanswered points to tie the game at 21-21 in the third quarter, but Iowa Wesleyan’s 16 points in the fourth quarter ended the game with a Westminster Blue Jay 37-21 loss. The Blue Jays are now 4-3 on the season and 4-2 in the UMAC.

The Blue Jays won the coin toss and chose to defer to the second half. The Iowa Wesleyan Tigers returned the Blue Jay kickoff 55 yards to start their drive on the Westminster 30. The Tigers drive was cut short when sophomore Kyree Hart intercepted the ball on the 13-yard line.

Freshman Latif Adams totaled 35 offensive yards in the Westminster drive, but an incomplete pass on 3rd and 7 forced the Blue Jays to punt.

A 68-yard touchdown pass put Iowa Wesleyan on the board, and the PAT was good, giving them a 7-0 lead.

The Blue Jays next drive was cut short with a Tiger’s interception on the 15-yard line that was returned 8 yards. The Tigers ran out the time left in the first half and started the second half with a 7-0 lead. The Tigers completed a 38-yard touchdown pass to take the 14-0 lead with 11:57 left in the second half.

The next three drives ended in three-and-outs, and Iowa Wesleyan took over with 5:55 left in the second half. A holding penalty on the Tigers voided their touchdown, but an 18-yard rush put them back on the 1-yard line, and the Tigers pushed the ball through to put them up 21-0.

The Blue Jays answered back with a 24-yard touchdown pass from senior quarterback Joe Plassmeyer to junior Austin Kempker with 20 seconds remaining in the half. Ludwig’s PAT was good, bringing the score to 21-7.

Iowa Wesleyan started their drive with 17 seconds left on the clock, but an interception by junior Bret Robertson stopped the Tigers from advancing up the field.

A forced fumble by the Blue Jays halted the Tiger’s next drive, and Westminster’s junior Carlos Weeden Jr. recovered at the Westminster 45. After three plays, the Blue Jays were unable to get the first down and punted.

Another fumble by the Tigers was recovered by Westminster’s freshman Josh Brown at the Tiger’s 13-yard line. Two complete passes from Plassmeyer to sophomore Jack Williams gave the Blue Jays their third touchdown of the game. The PAT by Ludwig was good, tying the game at 21-21 with 1:34 left in the third quarter.

A sack by senior Kyle Bryant put the Tigers at 3rd and 11 going into the fourth quarter, and a stop by Bryant on the Tiger’s rush forced them to punt. Westminster started their drive with 14 minutes on the clock, but two short plays and an incomplete pass left the Blue Jays punting on their own 34-yard line. The snap for the punt went over Ludwig’s head. He fell on the ball in the endzone, but was downed for a safety for the Tigers.

With just over seven minutes left in the game, the Tigers rushed for 36 yards to the Westminster 1-yard line, and finished with a 1-yard touchdown rush. The Tigers took the 30-21 lead.

The Blue Jays held the Tigers from scoring and took over at their own 5-yard line with 1:54 in the game. The Tigers put the final touch on the game when they intercepted Plassmeyer’s pass and returned it 60 yards for a touchdown.

The Blue Jays were unable to push past the 50-yard line in the final seconds, ending the game with a 37-21 loss.

Freshman Sean Freeman totaled 11 tackles. Bryant finished with 10 tackles including a sack and 2.5 tackles for a loss of 7 yards.

The Blue Jays host Northwestern (Minn.) on Saturday, October 25 for their Homecoming Game. Kickoff is at 1:00 p.m.