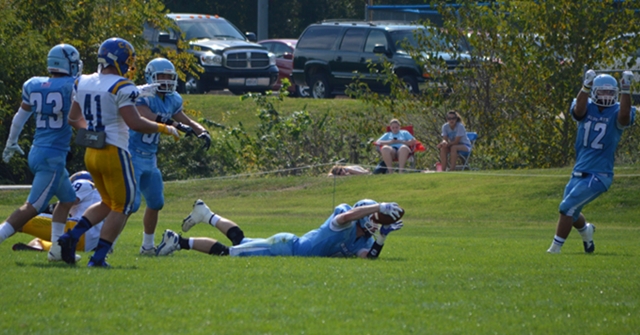 The Westminster football team was unable to fend off a second-half comeback by the College of St. Scholastica Saints on Saturday, dropping their record to 2-2 on the season.  Following the 31-24 home loss, the Blue Jays now have a record of 2-1 in Upper Midwest Athletic Conference (UMAC) play.

The Blue Jays started the scoring early in the game on a 20-yard field goal by junior Kevin Ludwig following a 47-yard drive by the Blue Jays.  The next St. Scholastica drive was cut short by an interception by sophomore Brett Simon, giving the home team the ball near midfield.  Senior Joe Plassmeyer took advantage, and after marching the offense down the field, scored on a 3-yard rush.  A good point after attempt put the Blue Jays up 10-0 with over four minutes remaining in the first quarter.

The Saints dented the Westminster lead with a field goal early in the second quarter, but the Blue Jays would soon answer with their second touchdown of the game.  Plassmeyer’s 1-yard pass to junior Austin Kempker and another good PAT gave the home team their largest lead of the day at 17-3.

About a minute later, the Saints answered with their first touchdown, cutting the lead to 17-10 with 5:40 left in the half.  A pair of penalties complicated the next drive for the Blue Jays and they were forced to punt with just under a minute to go.  Westminster took the ball back again though on another interception by Simon and downed the ball to end the half.

The Blue Jays received the ball to begin the second half but fumbled, and were unable to recover.  St. Scholastica capitalized with a game-tying touchdown pass.  With the game knotted at 17, the Blue Jays started a drive, but a Saints interception and subsequent 1-yard touchdown run gave put the home team behind for the first time.

The Jays turned it around quickly though, with a one-play drive to score a touchdown.  Plassmeyer connected with sophomore Mike Washington for an 83-yard pass and score.  Ludwig’s PAT tied the game again at 24.

St. Scholastica scored their third touchdown of the quarter on the next drive, making the score 31-24.  Neither team would be able to score again in the second half, despite several long drives by the Blue Jays.

Plassmeyer threw for 346 yards on 24 completions and two touchdown passes.  He also rushed for another touchdown and 26 yards on 7 carries.  Freshman Latif Adams was the leading rusher with 77 yards on 14 carries.  The receivers were led by Washington’s 110 yards on three catches, including a touchdown.

The Blue Jays’ next game is a UMAC contest at Minnesota-Morris on October 4. Game time is noon and can be watched here.