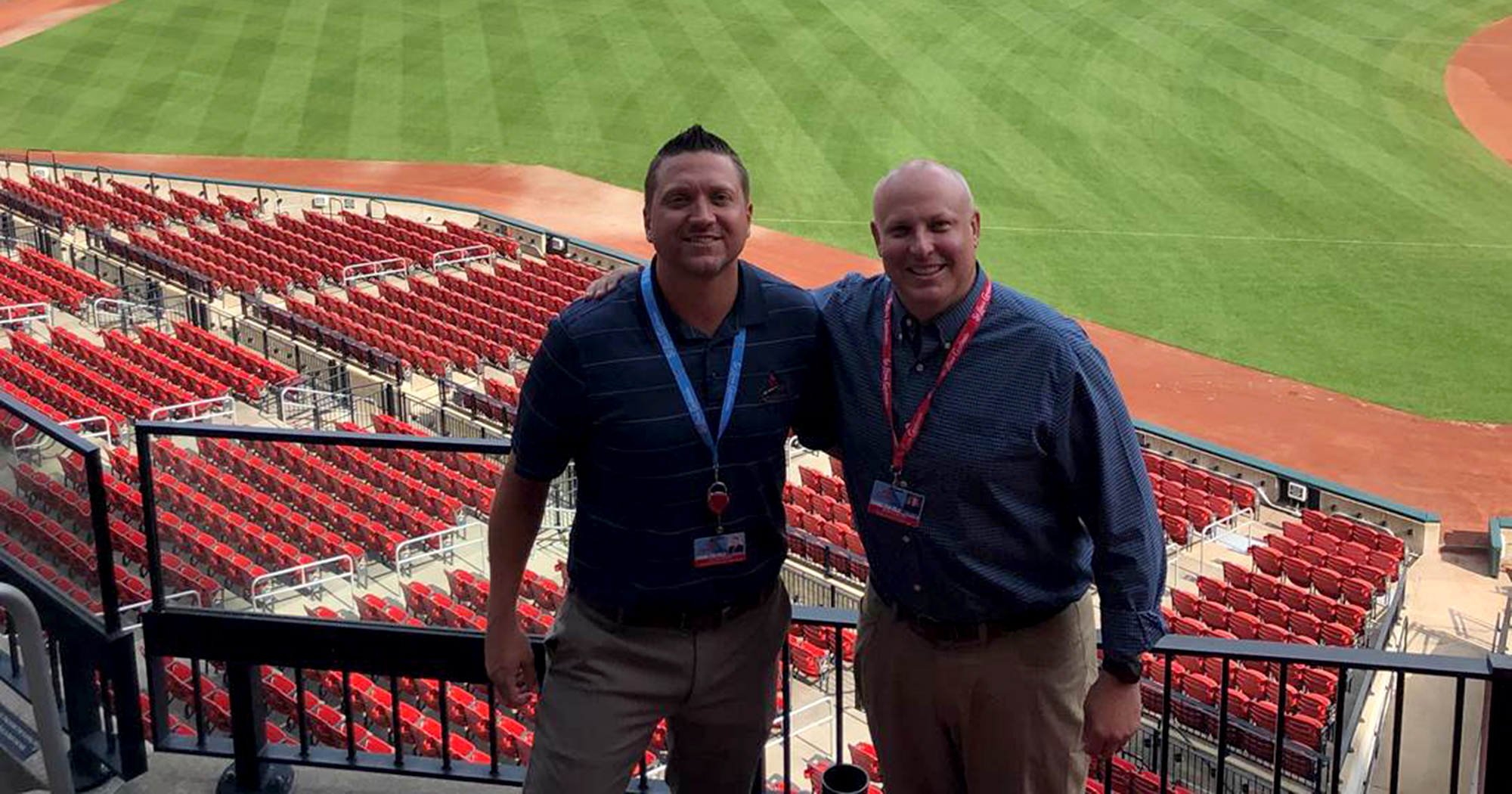 Adam Froidl, ’05, left, and Rob Fasoldt, ’98, right, both say their Westminster College education led to their dream jobs with the St. Louis Cardinals.

Cardinals Baseball fans are receiving regular reminders that Westminster College is a stellar institution with a formidable reputation. Alumni Rob Fasoldt, ’98 ΚΑ, and Adam Froidl, ’05 ΚΑ, voice a 30-second radio ad that is running on the Cardinals Radio Network through the postseason.

In the segment, Fasoldt and Froidl point out they both have a strong bond because of the College.

“We found our purpose at Westminster College in Fulton, Missouri,” Fasoldt says.

It turns out that purpose led both alums to dream jobs in the Cardinals front office. Fasoldt, of St. Louis, MO, is the Director of Ticket Sales and Retention with the Cardinals, while Froidl, of Bonne Terre, MO, is a Corporate Sales Account Executive.

The fraternity brothers emphasize that Westminster is ranked in the top 15 percent for graduate earnings. They also mention what the College has known for a while: Within six months of graduation, alumni experience a 97 percent job or graduate school placement rate.

And the College is a Forbes Best Value College.

Described as “one of America’s historic and transformative colleges,” Fasoldt and Froidl were sure to include that Westminster is the home of Winston Churchill’s “Iron Curtain” speech.

The radio segment is a major advertising opportunity for Westminster — the Cardinals Radio Network is the largest in Major League Baseball, spanning more than 150 affiliates in eight states.

Furthermore, with approximately 50 percent of alumni involved in varsity sports, the radio segment is finely tuned to one of its targeted audiences.

Finally, Cardinals fans and visitors to Busch Stadium in St. Louis can catch learn even more about Westminster through the College’s new digital ads. Like the radio segment, digital ads are regularly running through the postseason on stadium-facing digital LED signs on the Cardinals Nation Rooftop.

Be sure to listen to the radio segment here, and go to the Westminster website here for more information about the College.