Baseball Wins 2 of 3 in Series With Blackburn 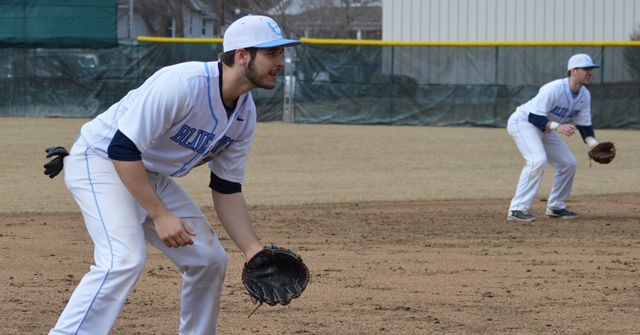 The Blue Jays opened up game one with three up, three down. Senior Andy Pichler led-off in the first for the Blue Jays with a single and was moved to second with a single by junior Tim Chambliss. Sophomore Deion Hughes singled and advanced to second with a error by left field, scoring Pichler and Chambliss. De. Hughes advanced to third on a wild pitch and was brought home with freshman Tanner Branneky’s sacrifice fly, bringing the score to 3-0.

Blackburn scored two in the sixth inning, bringing the game to 5-2. De. Hughes led-off the bottom of the sixth with a double and advanced to third with Da. Hughes’ at bat. He scored with a third baseman’s error, bringing them up 6-2. Blackburn added one more run in the top of the seventh. The Blue Jays held strong and ended the inning before they could score again, ending game one with a Blue Jay 6-3 win.

Game two of the series was a back and forth game. Blackburn scored first with a RBI single in the top of the second. The lead was short lived as the Blue Jays tied up the game in the bottom of the second. Junior Tyler Branneky was hit by a pitch and advanced to second as Da. Hughes was hit. Ta. Branneky advanced Ty. Branneky to third and Washington hit a sacrifice fly to center field to score Ty. Branneky.

Blackburn scored a run in the top of the fourth to bring the Blue Jays’ lead to 3-2, but Washington led-off in the bottom of the fourth with a homerun to take a 4-2 lead.

Blackburn scored a run in the fifth and the tying run in the seventh. The game was scoreless in eighth and ninth inning, sending the game into extra innings.

Blackburn scored on a single in the top of the tenth to take the 5-4 lead. Da. Hughes led-off for the Blue Jays with a single and was advanced to second with a sacrifice bunt by sophomore Jacob Holtgraewe. Da. Hughes advanced to third on Washington’s out. Sophomore Ryan Strohm and Backes were walked, bringing Pichler to the plate with bases loaded and two outs. Pichler cracked the game winning 2 RBI double to bring in Da. Hughes and Strohm and end the game with a 6-5 win.

Sophomore Collin Brinker (1-0) was credited as the winning pitcher. He pitched 2/3 of an inning and allowed no runs. Freshman Miller Bowles pitched 3.1 innings and sophomore Will Miller pitched six innings and struck out three. Ty. Branneky went 3-4 from the plate.

Westminster and Blackburn returned to the field on Sunday to round out the three-game conference series.

Pichler led-off in the first with a single and then stole second. De. Hughes hit a RBI single to score Pichler, advancing to second on the throw. De. Hughes then scored off Da. Hughes’ single.

Blackburn managed to tie the game in the top of the third. The game remained 2-2 until Blackburn scored a run in both the fifth and sixth, bringing their lead to 4-2. They grabbed three runs in the seventh and five more in the eighth to short game the Blue Jays in the eighth inning, 12-2.

Freshman Jake Lund (2-1) was credited with the loss. He pitched 5.1 innings and struck out one. Washington went 2-2 from the plate.

The Blue Jays take the week off before heading to Greenville, Illinois for their second three-game conference series with Greenville College. Game one will start at 6:00 p.m. on Friday, March 28, followed by the doubleheader on Saturday, March 29 starting at 1:00 p.m.