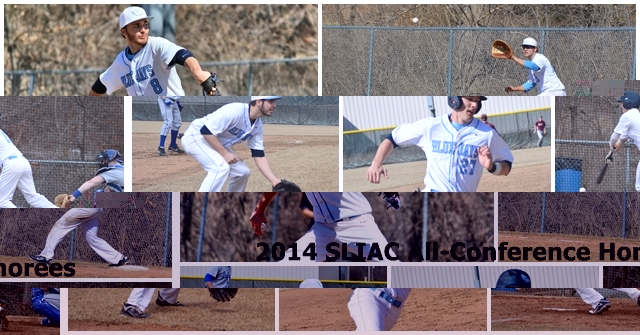 The Westminster baseball team closed out the 2014 season with a 21-14 record and a fifth place conference finish. The Westminster Blue Jays went 15-12 in the St. Louis Intercollegiate Athletic Conference (SLIAC), but were unable to make the conference tournament for the first time in four years.

Branneky led the team with a .366 batting average and a .577 slugging percentage. He finished the season with 45 hits and 31 runs. Of the 45 hits, he had eight doubles, three triples and four homeruns. On the defensive end, Branneky had 67 assists and a .900 fielding percentage.

Hughes was a threat from the plate and from the mound. He led the nation for two consecutive weeks for strikeouts per nine innings. He finished the season with 79 strikeouts and broke the Westminster season record with a total of eight wins on the season. He pitched 55.2 innings and had a 1.94 ERA. From the plate, Hughes hit a .361. He led the team with 48 hits and four triples, and scored 29 runs. He also ranked second on the team with 26 RBI.

Junior Tim Chambliss was selected to the SLIAC All-Conference Second Team. He led the team with 274 putouts and a .990 fielding percentage. He also led the team in RBIs with 30 and doubles with 10. He finished the season with a .346 batting average and scored 26 runs.

Senior Andy Pichler was named to the SLIAC Honorable Mention. He held a .987 fielding percentage and led the team with 11 stolen bases. From the plate, Pichler went 40-137 with 25 runs scored.

Sophomore Ryan Loethen was named to the SLIAC All-Sportsmanship Team.